MattyCollector has announced they will be releasing a Baby Skeletor figure.  The figure will measure 12” tall with articulation in the legs, shoulders, and neck.  The figure comes with a removable T-shirt that says “Born to Rule” and a rattle version of his Havoc staff.  The box he comes in will look like an Eternian bathroom and Baby Skeletor comes with a tiny toilet for him to sit on.  The figure will be in line with Matty Collector’s prices, so he will run you 35 dollars if you need to own this tiny terror. 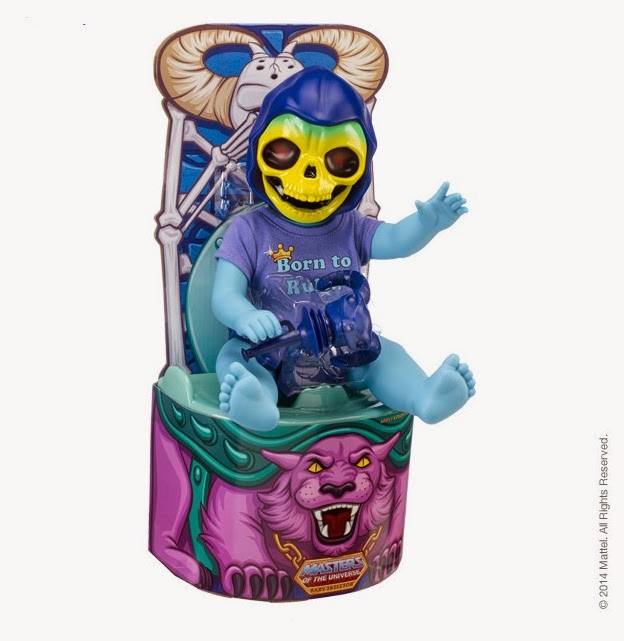 So you may be asking yourself why this exists.  It’s a pretty valid question actually.  The figure is based off a Robot Chicken sketch where Skeletor turns himself into a baby to sneak into King Randor’s castle.  It’s Robot Chicken so Skeletor ends up with a spanking fetish at the end of it.  Anyway it’s not the first Masters of the Universe figure to be produced because of Robot Chicken, but it may end up being the strangest.

Email ThisBlogThis!Share to TwitterShare to FacebookShare to Pinterest
Labels: Toys

The new Lego Batman game has just been announced.  This one is subtitled "Beyond Gotham" and the video features the Justice League hanging out in space.  Hopefully this means that DC's other heroes will get more game time in this one.  I would be much more excited if the game was called DC Heroes and not Batman 3.


When Marvel released their Lego game it wasn't called Spiderman, Avengers, or X-Men.  They were brilliant in just using the generic Marvel Heroes.  Sure Spiderman, Wolverine, and Iron Man get a lot of screen time in the story but a lot of other characters get their time to shine.  I wish DC would have done the same this time around.
Posted by Ken O at 11:17 AM No comments:

It’s Hangover Thursday, how’s your head?  I know it’s been a very long time since we’ve run a Hangover Thursday.  One of the biggest reasons is I just haven’t had the time to hang out at bars as much as I used to.  Drinking out at the bar is also way more expensive than sitting at home and cracking a few open with friends.  I went out to watch some hockey on Sunday and bought the most expensive bottle of beer I’ve purchased. 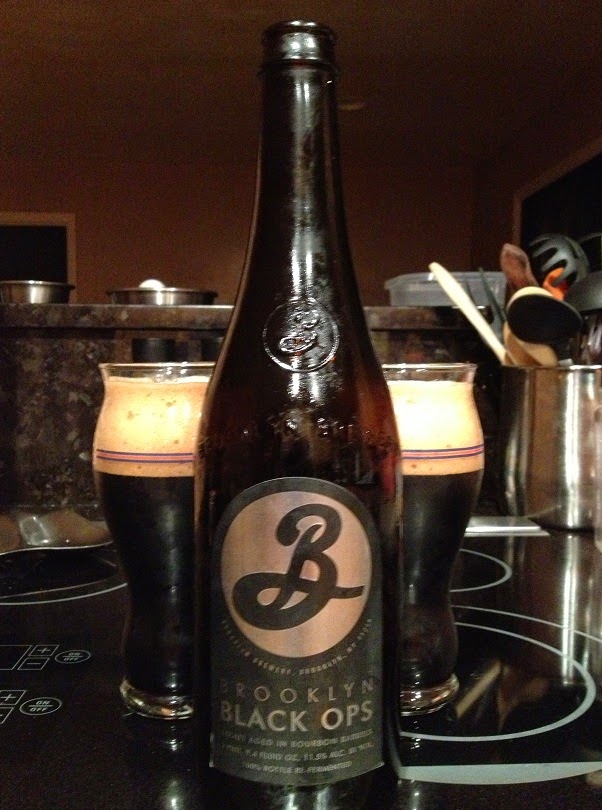 The back of the Black Ops bottle reads:  Brooklyn Black Ops does not exist.  However, if it did exist, it would e a robust stout concocted by the Brooklyn brewing team under cover of secrecy and hidden from everyone else at the brewery.  Supposedly “Black ops” was aged for four months in bourbon barrels, bottled flat, and re-fermented with Champagne yeast, creating big chocolate and coffee flavors with a rich underpinning of vanilla-like notes.

So every year Brooklyn does a very limited run of Black Ops and every year the beer is a little bit different.  I had a bottle from the 2013 batch which had an ABV of 11.5%.  I’m a big fan of Russian Imperial Stouts anyway, so I was very excited about this one.  So how was it?  The first thing I noticed was how strong the bourbon smell was.  I expected that smell to carry over to the taste but it didn’t.  What I got was a smooth chocolate stout up front followed with that bourbon kick. You tasted that 11.5 in the end, but it was never overpowering.

I don’t know that I’ll ever see a Black Ops in the wild again.  I enjoyed my first though. It was not my favorite stout but if the price was right I’d certainly pick up another bottle or two.

It’s time for a history lesson!  I started playing Dungeons and Dragons in the 80s.  I wasn’t even in my teens when I started so I had to have my parents take me to game stores.  I was lucky too; there were a few really good ones around us at that time.  So my parents were aware of what I was doing with all the dice, notebooks, and miniatures.  It was also around that time I first saw all of the religious warnings about how dangerous Dungeons and Dragons was.  The most famous of these is the mini comic from Jack Chick called Dark Dungeons.


That comic was released way back in 1984.  Now it is becoming a licensed movie.  Sure it’s a low budget movie that is premiering at GenCon but it is still official.   The movie started with JR Ralls winning 1,000 in the Oregon lottery.  After that he wrote to Jack Chick and somehow was given the rights to make this movie.  Finally Ralls took the idea to Kickstarter to round out his funding.

The movie can be preordered at darkdungeonsthemovie.com.  This is really a must own for anyone who has spent time around a table throwing funny dice and pretending to be fantasy warriors.  The movie is going to be a faithful adaption of Chick’s original comic; which means it is going to be so over the top insane that I can’t wait to see it.

What We Do in the Shadows

What We Do in the Shadows is a mockumentary about three vampires living in a flat together in New Zealand.  The movie is loosely based on a short film that Jemaine Clement and Taika Waititi made in 2005.  The duo have co-written, co-directed, and co-star in the 85 minute full length version.  The trailer below explains the premise far better than I can.

The movie already looked amazing and then Rhys Darby showed up.  I can’t wait.

Lego: Edge of the Empire

I’ve been very happy with Fantasy Flight’s Edge of the Empire role playing game.  It receives a lot of criticism because of its use of proprietary dice but I think the system works perfectly.  I started with Star Wars RPGs way back in the West End.  The license has gone through a lot of variations and a handful of different companies before arriving at where it is today. 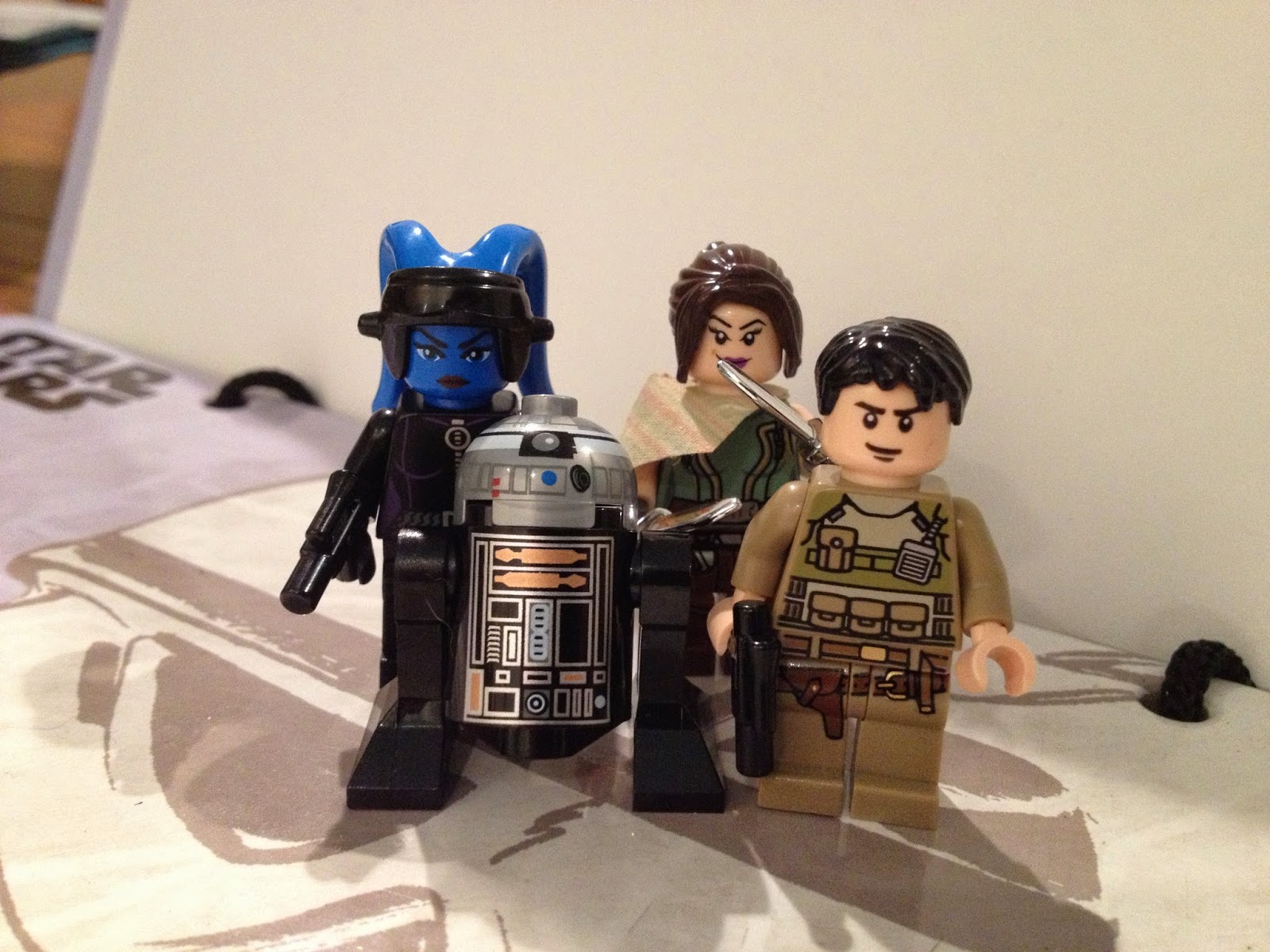 I’ve been running an Edge of the Empire campaign for a few months now and despite some rocky parts I couldn’t be happier about where the game is headed.  Because I enjoyed it so much I ended up creating Lego figures of all the characters.  Ofanea Antath is the Twi’lek, the astromech is R2-X8 (Rx for short), Miran Quix is holding the knives, and Jelnik Pelo is holding a blaster. 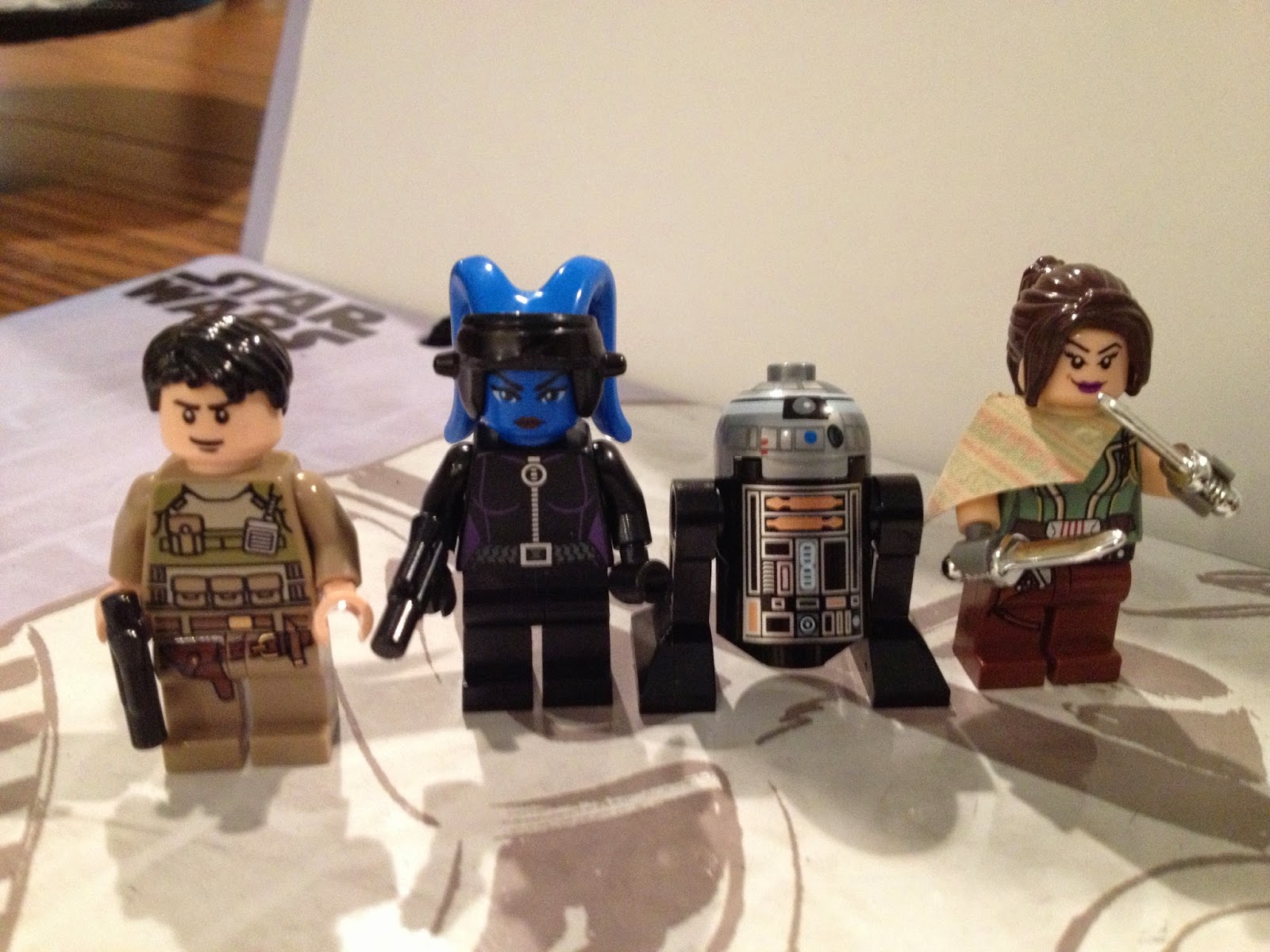 The group is currently exploring ancient ruins for a Datacron, on the run from a Hutt crime lord, searching for leads on a mysterious Crystal Nexu statue, and hunting down an ex-partner who betrayed them all.  Needless to say there is a lot going on and the player’s don’t currently know the half of it.  If you like to throw dice and pretend you’re a scoundrel I can’t recommend Edge of the Empire enough.

The Skylanders model of toy + video game was a huge success.  So much so that Disney followed it up with their Infinity game.  Sure there are differences in what you can do with the games but the most basic concept is the same; put a toy on a reader and it does something in your game.  I grabbed the first Skylanders when it came out because I thought the concept was so interesting.  That and I could make a walking shark wear a pirate hat and punch things with brass knuckles. 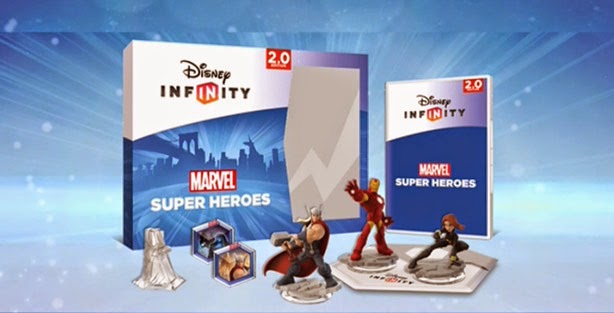 Despite really liking the blocky art style of Disney’s Infinity game I was okay with admiring them on the shelves and not jumping into that game.  Disney is ready to start talking Infinity 2.0 and that involves Marvel.  To start with we’ll be getting the Avengers cast.  There will be 20 playable figures released, so we can start speculating on who those will be.  Spiderman and the Guardians of the Galaxy both show up in the teaser video.  The characters keep the Infinity style and it works for most of them; I didn’t care for the Modok in the video.  I don’t know that I’ll be picking up the game but I’ll be watching the release closely.  Hopefully they’ll make an Iron Fist figure.

The other  thing to remember is that Disney owns another big franchise that would do very well in an Infinity style game.  Seriously if they start making Star Wars Infinity I’ll probably have to sell my house.
Posted by Ken O at 9:42 AM No comments: