The August Lego sets have started to sneak onto the store shelves.  That might not mean a lot to some people but I’ve been anxiously awaiting their release.  The reason I’m so excited is that this year Lego has created a line of Scooby Doo toys.  I’ve always liked Scooby Doo but that love has been rekindled lately.  A while back I realized even though I had all these streaming services I couldn’t show my son the original Scooby Doo Where are You? cartoons.  Just showing him the show opening had him excited so at that point I pretty much had to order the DVD set.  We’ve watched all four discs, two full seasons of Scooby Doo and we both loved every second of it.  Charlie the Robot is easily my son’s favorite. 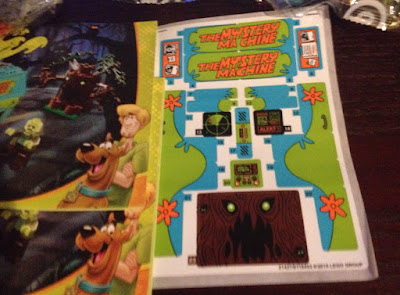 So the Scooby Doo line consists of sets across all sorts of different price ranges.  The smallest is a Mummy set, then Headless Horseman/biplane, then the Mystery Machine, a haunted lighthouse, and finally a huge haunted house.  I showed incredible restraint and only picked up the Mystery Machine.  That night I started up a mini-marathon of Mystery Incorporated and started putting the set together.  The Mystery Machine comes with Fred, Shaggy, Scooby, a Zombie, and a tree monster.  Notice it doesn’t include the girls.  Sadly to get everyone you’d have to pick up the big haunted house as well.  I get separating the figures but having to pick up the big set to round out the gang sucks. 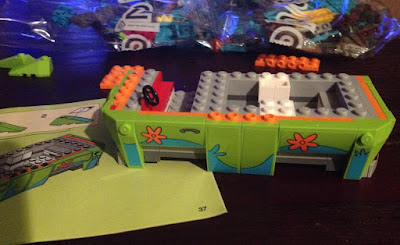 What also sucks about the wonderful Mystery Machine model is the number of stickers.  It makes sense, the less printed pieces Lego makes the cheaper it is for them but the Mystery Machine comes with 23 stickers.  If you don’t have a steady hand you’ll probably want someone’s help when putting this one together.  The other thing I didn’t love is it is going to be a tight, tight fit to get everyone in the van.  Lego is a strange size.  Make a vehicle fit the right amount of people and it looks out of scale.  I think they could have gotten away making the van a little larger than it is.

All that said, it is a fantastic toy.  Looking at it just makes me happy.  The sides fold out so you can see in the back easily and the roof lifts off for the same ease of access.  The mini-figures are great.  In the other sets all the villains can be unmasked to show that they’re really people.  It’s that level of detail that makes these sets so much fun.  I had so much fun I couldn’t resist throwing together my version of the Wacky Races.  I had so much fun with the Scooby Doo sets I’ve already got some customer Lego ideas in the planning stages.  I won’t spoil it now but I’ll give some hints.  The first and easier is putting together a few of my favorite supporting cast members.  The second would be more involved and would be building another Hanna-Barbera character that would be right at home in that race picture… 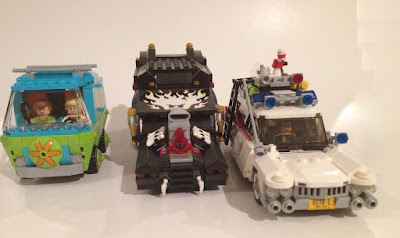 WWE 2K16 just announced a new pre-order reward today and the commercial for it is amazing.  I can't remember the last time a non-wrestler was included in a WWE video game.  With the create a wrestler feature the game's servers are full of unofficial characters based on comic books, television shows, and movies.  Adding the Terminator is pretty cool.  Arnold is a part of the WWE Hall of Fame and the last Terminator was featured pretty prominently at the last Wrestlemania.  It looked absolutely ridiculous, but it was featured.

That video isn't enough to make me pre-order though.  WWE 2K15 cut a lot of create a wrestler features and there hasn't been any indication that those cut items are returning this year.  I have to wait and see before they get any of my money again which is disappointing because I'd really like to have a good wrestling game on my X-Box One.
Posted by Ken O at 12:10 PM No comments:

While I haven't put an army on a table in a long time, I am still a huge fan of Warhammer 40,000's lore.  I want to pretend I'm crushing my enemies with a Thunder Hammer I just don't have the time or space to do it lately.  So I'm really happy to see Rodeo's new mobile game Deathwatch - Tyranid Invasion is out on mobile devices.  This is the same team that put together Warhammer Quest.  I put a ton of time into Warhammer Quest.  So I'm very excited for Deathwatch since it takes the same type of turn based gameplay and moves it into the 40K universe.


In Warhammer 40K the Deathwatch is a group made up of all the other Space Marine chapters. When a marine joins they paint their armor black to match their new brothers.  This is a great group to use for games because it lets people pick characters from their favorite Space Marine Chapters and doesn't just focus on one like the underrated Ultramarine game did

The game will contain 38 different Space Marines with over 150 different weapons and wargear. Once you put your team together you'll take them through 40 different missions.  Of course the game will support in app purchases.  The ones in Warhammer Quest were for things like new areas, new enemy types, new heroes, and new weapons.  I'd expect Deathwatch to have a very similar setup.

So at this point most people have heard of Babymetal, the Japanese pop singers backed by a heavy metal band.  Something made me think of them yesterday and I played one of their videos for my son.  He was really into it and we ended up watching a handful of their videos back to back.  A little later we discovered Ladybaby.


Two teen girls and a crossdressing Australian named Ladybeard.  I can describe it all I want, but it really is something you have to see for yourself.  LED!
Posted by Ken O at 7:41 AM No comments:

It has been announced that Elodie Yung has been cast as Elektra in Netflix's Daredevil.  Between Punisher and Elektra it looks like Hell's Kitchen is going to be pretty busy.  It's pretty big news since it's hard to have a conversation about Daredevil without someone bringing up Elektra.  Hopefully that means there will be lots of Hand ninjas this time around. 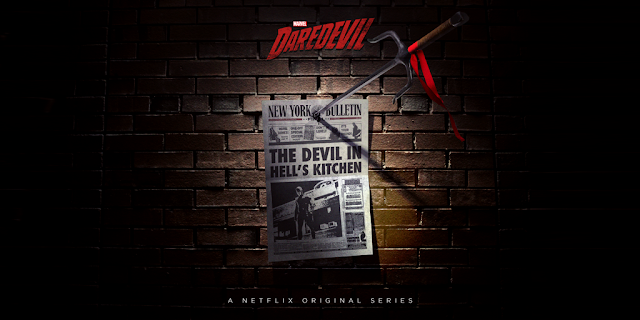 I was going to write something about my anger at comic convention exclusives when I saw one that I had to talk about individually.  Mattel and DC comics have decided to cross DC’s superheroes with Thomas the Tank Engine.  Once you see the pictures you’ll wonder why they decided to do this because the results are terrifying.  The five piece set includes Superman, Batman, Joker, Harley Quinn, and Cyborg. 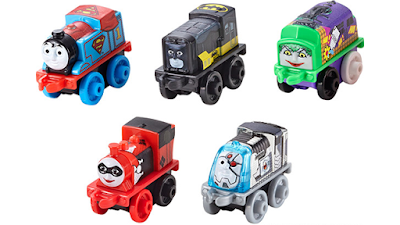 As the father of a 3 year old there are a lot of trains on my television.  Dinosaur Train and Chugginton are the ones we usually watch.  My son has seen Thomas, but thankfully he’s bored by it.  I say thankfully because the show is like watching paint dry and those trains are creepy looking.  The DC mash up somehow makes them look even scarier.  I thought Joker was the scariest looking until I really focused on Batman.  It looks like someone put a bloated Michael Keaton into a trash compactor and then glued him to the front of a train.  If you’re interested in these nightmares on wheels you can check out mattycollector.com for details.
Posted by Ken O at 11:21 AM No comments:

I guess I wasn’t ready to let Hockey go this year because I’ve been thinking about it a lot.  I’m sure it was stirred by the draft and all of the big trades that are going on right now, but I just need some more hockey.  As I was thinking about my favorite sport I remembered I didn’t share this year’s 2015 Minnesota State High School All Hockey Hair Team.

I know I posted last year’s video to That F’ing Monkey but I promise as long as Pulltab Productions keeps making these videos I’ll keep spreading the word about them.
Posted by Ken O at 7:57 AM No comments: