Last year's WWE 2K15 left a lot of long time fans pretty unhappy with the game.  It seems any time a yearly series makes the jump to a new platform they seem to leave out half of the regular features.  In WWE 2K15 you couldn't even make female wrestlers.  We are about a month away from the new WWE 2K16 and it looks like most of the things that were cut are coming back.  Created female wrestlers are back, there are 100 save slots for created wrestlers, and their My Career mode looks drastically improved.  You might even say this a New Day.

Xavier Woods even manages to mention his wonderful Up, Up, Down, Down youtube channel.  I skipped last year's game but I think I'm back aboard the hype train.  WWE 2K16 will release on October 27th.  Pre-ordering will net you a Arnold Schwarzenegger as the Terminator character.  No other DLC has been announced at this time, but there will most likely be a Season Pass.

A remastered version of Castle Crashers just came out on the Xbox One yesterday.  This was one of my favorite side scrolling beat-em ups on the 360 so I'm really happy to see that it is making the jump to the new console.  The even better news is that for a limited time the Remastered version is free to those who bought the original version on the 360.  There were some slight hiccups with the process early yesterday morning, but I was able to download it last night with no issues at all.

You won't have to lose your progress either!  Behemoth,, the creators of Castle Crashers, posted the image posted above.  The entire process was extremely fast and would have gone even quicker if I didn't have to track down where I had stored my 360 controllers.  The DLC carries over too, so if you added the extra characters like the King they will be available to play.

If you didn't pick up this wonderfully cartoony hack and slasher when it was first released it is still worth the full asking price.  It's a fun game solo but really shines in couch co-op.
Posted by Ken O at 3:33 PM No comments:

November 20th can not come quick enough.  We finally have a release date for the second Marvel Netflix show, Jessica Jones.  Daredevil set a very high bar but everything released about Jessica Jones looks promising.  For those unfamiliar with the Alias comic series the show is set to go to some pretty dark places.  We know Luke Cage is going to be in about half the episodes, so it will be interesting to see how they handle him since I would have guessed his own show would focus on his origin.


Not only do we have a Jessica Jones release date but there has been a lot of casting information for Luke Cage released lately.  The two announcements that excite me the most are for long time Iron Fist supporting characters Misty Knight and Rafael Scarfe.
Posted by Ken O at 11:50 AM No comments:

Flash Friday: Justice League: Attack of the Legion of Doom!

Happy Flash Friday everyone!  It’s been awhile since I’ve done one of these.  I was in the store this week for something completely different when I ran across the newest Lego movie.  I knew a Lego Justice League movie was coming out, but I wasn’t paying attention to what was coming in the packaging.  Right now you can get either a DVD or Blu-Ray version of the movie and a Trickster mini-figure.  I honestly would have passed on this but getting a movie I can probably enjoy with my son and another member of Flash’s Rogues was too good to pass up. 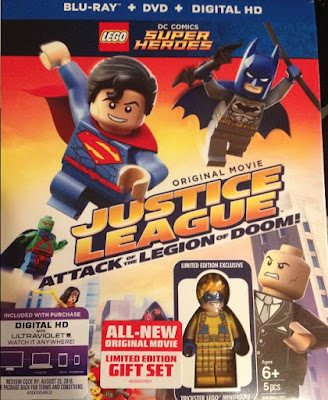 I just picked the movie up last night, so I haven’t had a chance to watch it.  I’m going to make a guess that it follows their other direct to video offerings.  It’ll be somewhat goofy and will have a handful of lines that make the adults smile.  There will be a couple good Easter Eggs for DC comic fans but nothing to amazing.  That’s my guess, because that’s what has come before it.  It I’m completely wrong I’ll post another article about it. 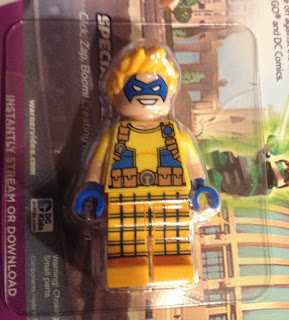 Obviously Trickster was my main reason for picking this up and I think he looks great.  As far as Flash villains go he joins Captain Cold and Gorilla Grodd.  Hopefully the success of the TV show will increase the visibility of the Rogues.  I’d really like to see Captain Boomerang, Weather Wizard, and Heatwave show up in Lego form.
Posted by Ken O at 8:00 AM No comments:

Last Christmas my son and I were gifted Disney Infinity 2.0 and it hit us as gently as a heroin addiction.  My house has an army of wonderfully sculpted plastic statues of Marvel, Pixar, and Disney characters.  I was able to make my own fun out of the game, but the 3 core play sets were very combat oriented and the game’s combat really wasn’t that fun.  Last Sunday Disney Infinity 3.0 launched with its new Star Wars theme.  The weeks before the launch were full of preview video and interviews talking about how much had changed.  The new information looked promising but how different would it really be?

I don’t believe 2.0 is a game I could recommend to someone.  3.0 looked like it would change that but I wasn’t sure.  The starter set is going to give you Anakin Skywalker, Ahsoka Tano, and the Twilight of the Republic play set.  Playstation users were able to order a special edition which comes with the Rise of the Empire set, Luke, Leia, and Boba Fett.  All of that content will be available later to all other versions.  I enjoyed the Clone Wars series so I was okay with waiting for the Classic stuff.  I ran through the tutorials and started the playset.  I’ve played enough to confidently form an opinion but I haven’t come close to doing everything that you can do.

First things first, the new combat is fantastic.  The Jedi pull or push enemies, send them flying into the air, and then slice them to ribbons with their lightsabers.  Thankfully the other new characters are just as impressive.  Sabine from Rebels has become one of my favorites as she leaps over enemies and sprays them down with her dual blasters.  On top of that there is also starship combat.  It’s a simple shooter but a lot of fun.  I’m looking forward to jumping into the X-Wings when I pick up the Classic stuff. 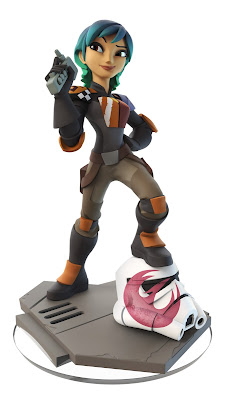 It isn’t just the combat that has improved though.  The driving also got overhauled.  In the previous versions jumping into a car felt floaty and handled odd. The new mechanics feel very familiar.  Even the little I’ve seen from the new playsets seem to do a good job mixing up the action with doses of platforming, exploring, and space combat.  There is a lot more coming out for the game too.  A speedway racing disc, a Force Awakens set, and new Marvel set have all been announced.  While I couldn’t recommend 2.0 I can recommend 3.0; just don’t buy it at full price.  Figures, playsets, and core boxes go on sale for this franchise all the time.  The figures can be a huge money sink and paying full price for them just doesn’t make sense.  During the launch week Target is running a 2 for 20 sale and Best Buy has buy 3 items get 1 free.
Posted by Ken O at 9:28 AM No comments: