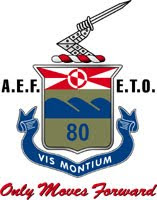 It is Memorial Day. A day most people will be happy to not be at work, maybe go to a picnic. Sadly very few will remember the reason for it though. To remember those lost. Four of my uncles served in Nam, my Grandfather in WWII. On this day I’m thankful for those who served our Country and lost their lives; but I’m also thankful that my family members were able to return. While I have no doubt my Grandfather’s experiences eventually lead to his health problems, I’d like to briefly share the information I have about his time enlisted. This is from an 80th “Blue Ridge” Infantry division book I have.

Earl Hall was drafted Sept 27, 1943 from Ft. Wayne MI and set to Camp Roberts, CA for F.A. Basic Training. While there he was second highest marksman in his battalion. In February 1944, he was sent to Ft. Meade, MD for six weeks waiting to be sent to Europe. From there, he transferred to Boston where he boarded the Queen Mary and arrived in England. Two weeks later he was on a troop carrier and crossed the English Channel to land on Normandy Beach on June 11, 1944. Earl was attached to the 314th F.A. Battalion, Company A, where he earned the European African Middle Eastern Theater Ribbon, Good Conduct Medal, five Bronze Stars, and Victory Medal.

He will always be my hero and I miss him terribly.