Disney Infinity's 3.0 edition has been going strong with the Star Wars releases.  I haven't played the Force Awakens playset yet, but I can say that the Prequel playset is fun, the Original Trilogy playset is amazing, and the light up figures work better than imagined.  The Marvel news has been pretty quiet though.  We knew that there was a Marvel Battlegrounds playset coming out.  That it would allow up to four people to play and that one of the figures included would be an unmasked Captain America.  Unmasked if the perfect way to symbolize the movie universe because no one keeps their damn masks on, but that is a rant for another day.  But seriously, superheroes in movies and television need to keep their damn masks on.

The new Marvel lineup has been revealed even though many of the figures had already been teased or easily guessed by looking at Marvel's movie lineup.  An amazing looking Black Panther will be hitting the shelves along side Vision, Ant-Man, Black Suited Spiderman, and a pack of Power Discs.  Black Suited Spidey was a Vita exclusive for 2.0, but will finally be available to everyone.  The Power Disc pack includes The Tesseract, Nova Corps, Darkhawk, and Ghost Rider's Bike.  Which means everyone who buys that pack, really just buying it for that awesome motorcycle. 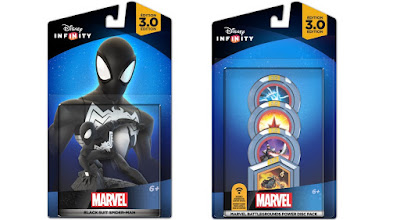 The other interesting thing to note is many of these packages have a wi-fi icon on them.  This is to let players know that these figures will require a software update on Disney Infinity to work.  Most consoles are connected to the internet but this an important fact for those who may have difficulty getting their game system online.