I’ve talked about the first comic I can remember liking, but I honestly can’t tell you what the first comic I’ve ever owned is.  I grew up in the era of spinner racks at the convenience store, so my first could have been any number of different things that would have made me happy.  I can without a doubt tell you what my son’s first comic book was though, because we just bought it this weekend.  Sure he had all sorts of kid’s books about superheroes, but he didn’t have an actual comic. 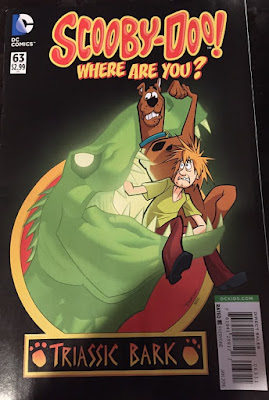 The week before I had heard him ask for one.  Not in a store or anything.  I think something on television had mentioned them, but I heard him say, “Where’s my comic book?”  At that very second I knew what he and I were doing on Saturday.  I took him down to a local shop.  It wasn’t where I got my first comic, but it was as shop I’ve been going to since I was 8.  By complete chance the owner was there, the same man who helped me start my first comic pull file.  We chatted for a bit and then headed off to the kid’s shelf where my son found Scooby Doo.

Not only was it Scooby Doo, but it had a dinosaur.  Or to be more correct a gh-gh-ghost dinosaur!  The little man was thrilled.  We read it together as soon as we got home.  The book actually has two short stories; one about a ghost dinosaur and another about a town given bad luck by black cats.  The dinosaur one is certainly a favorite, but since we have a black cat at home the second story was still pretty popular.  Sadly there was no Hex Girl appearance in the book, but that’s okay since it was for my son and not me. 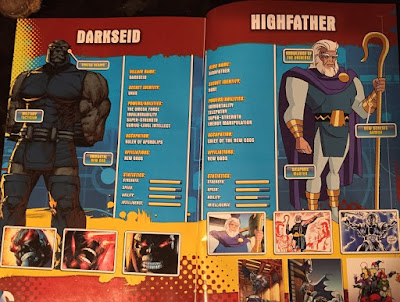 The end of the book had some superhero stuff like “spot the differences” and stuff like that.  Oddly it also included character files on Darkseid and the Highfather.  I get the concept, but I found the character choices a bit funny.