This weekend I was sent an advanced preview of the first two issue of Slave Labor’s comic Nova Phase.  I hadn’t heard anything about the book before I opened my email, so I didn't know what to expect.  Any book that lists Cowboy Bebop, The Rifleman, and Snatcher as influences immediately has my attention.  When I opened the files and started reading I wondered why this didn't exist earlier.  Nova Phase is a lot of fun. 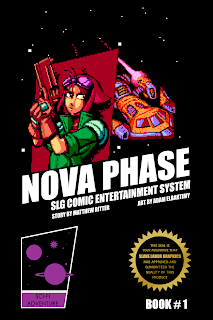 This isn’t a comic book, this is an extended cutscene from an early 90's video game and I mean that in the very best way possible.  Written by Matthew Ritter with art  by Adam Elbatimy Nova Phase mixes a space western story with retro video game style art.  It stars a bounty hunter who trusts too easily.  She gets involved with a rag tag group of adventures who are on the run from an evil army.  I've only read the first two issues but I’m hooked on the series.  If you grew up playing those early video games the style is going to hit you right in the nostalgia.  It’s too early for me to say how deep the story is going to get, but it has that madcap rollercoaster of action feel to it.  I called it fun earlier and I meant it. 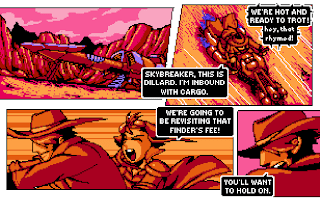