My next movie pick is the second film in John Ford’s Cavalry Trilogy, She Wore a Yellow Ribbon. John Wayne plays Captain Nathan Brittles, a career cavalry soldier whose retirement is quickly approaching. A Native American uprising complicates the impending change of command. As if there wasn’t enough going on in this movie; there is also a love triangle between Joanne Dru, John Agar, and Harry Carey Jr. 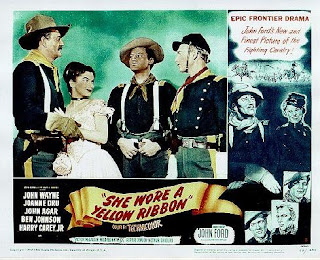 Wayne is particularly good in the role of Brittles. He was 41 at the time, so he is playing a character 20 years his senior. The good captain has lost his wife and his daughter, the army is truly the only family he has left. Now he is being forced to retire, he is losing the only family he has left. There are themes in this role that Wayne will revisit 27 years later when he plays J.B. Books in The Shootist. There is both a strength and a sadness in the character; combined they make him believable. 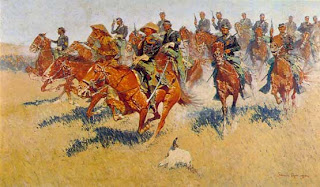 She Wore a Yellow Ribbon is also the only film in the Cavalry Trilogy to be filmed in Technicolor. John Ford wanted the film to resemble the works of Frederic Remington and Charles M. Russell. Color is a very, very important part of capturing those styles. The scenery is so striking that it practically becomes yet another character in the already large cast of talent. Filmed in Monument Valley, there are times it is hard to believe those colors appear in nature. The film went on to win the Oscar for Best Color Cinematography. 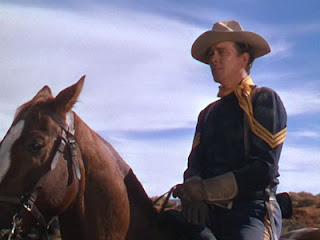 My favorite character in the movie is Sgt. Tyree. Played by Ben Johnson, Tyree is an ex-Confederate and Brittle’s chief scout. Johnson steals every scene he is in. The running gag with the character is that he is incredibly knowledgeable, but when asked for his opinion he always replies that it isn’t his department. Johnson was part of Ford’s stock company but was also a championship rodeo performer, horse wrangler, and stuntman. He also starred in another of my favorite movies, Mighty Joe Young. Johnson would win an Oscar for his 1971 performance as Sam the Lion. 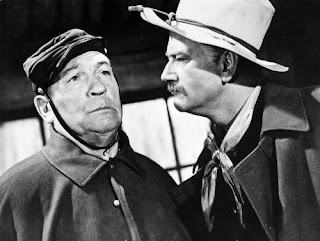 Another member of John Ford’s favorites is Victor McLaglen. The English McLaglen plays Top Sgt. Quincannon with a thick Irish accent. McLaglen had been a professional boxer in his past, and he has an extended, slap-stick bar room brawl that acts like a precursor to the one he and Wayne have a few years later in The Quiet Man. Quincannon is the main source of the films comedic relief. Playing the Irish stereotype to its fullest, the character is always looking for a drink. McLaglen won the Oscar for Best Actor in a Leading Role in 1936’s The Informer and was nominated for his supporting role in the Quiet Man 17 years later, although he didn’t win that one. 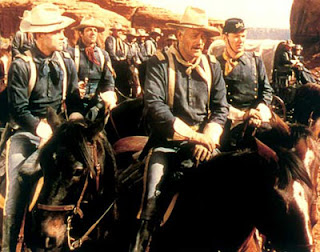 There is a lot going on in this movie. In fact there may be almost too much. At times it feels more like three episodes of a television show were combined together to make one movie. There are minor characters that you see two or three times during the movie, but the way they are handled makes it feel like there is a back story to them. If the movie is three episodes from a show, I want to see the rest of the episodes. I want to know more about the blacksmith or why everyone makes fun of Hochbauer. 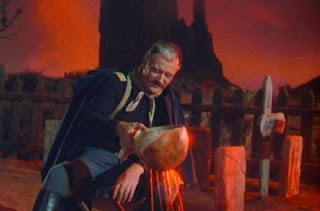 John Wayne movies are very important to me, because I was introduced to them by my grandfather. Watching them makes me feel like he is still around, watching them with me.  My favorite has changed many, many times since I was introduced to them. She Wore a Yellow Ribbon has been my favorite for probably the longest amount of time. I hope you enjoy it as much as I have.
Posted by Ken O at 8:00 AM