The last of my film picks is the 1954 Universal monster movie, Creature From the Black Lagoon. When Dr. Carl Maia, played by Antonio Moreno, finds a fossilized hand with webbed fingers he believes he may have found the missing link between people and fish. A large expedition full of scientists is quickly formed up and sent down the Amazon in search of a complete skeleton. What they find is a living Gill-Man who isn’t happy with them intruding on his home. 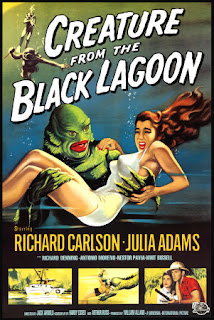 The Creature From the Black Lagoon has an interesting origin. Producer William Alland was at a party where cinematographer Gabriel Figueroa was telling a story of a fish-man in South America. That story eventually morphed into Creature from the Black Lagoon. Universal had such faith in the movie turning into a franchise they made sure that the ending would leave the story up for a sequel. It actually spawned two more movies; Revenge of the Creature and The Creature Walks Among Us. 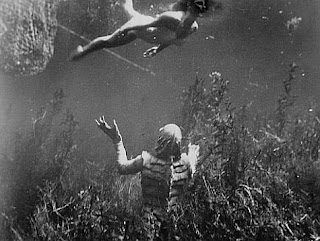 The underwater scenes are stunning. That isn’t me being biased because they were filmed in Florida either. There is something ethereal and beautiful about them. James Havens oversaw all of the Florida in filming while Ricou Browning played the creature in the underwater scenes. Browning and Adams are practically dancing when they are in the water together, although I have seen it referenced as something else too. Browning was a originally hired to scout underwater locations but when director Jack Arnold saw the test shots of Ricou swimming, he was so impressed he offered him the job. 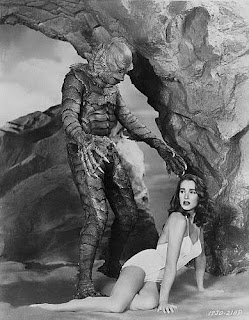 The creature was played by a completely different actor when on land. While Ricou was doing the underwater work Ben Chapman was back in California doing the Creature shots on land. Chapman was picked because of his size; he was 6’5”. Chapman was also the actor that Universal used for all of the Creature’s appearances around the film’s release. He was in the Creature suit on the Colgate Comedy Hour the week the movie premiered. 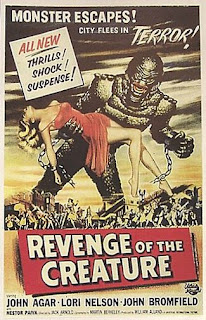 Even before the first Creature From the Black Lagoon movie was finished it was decided that the ending needed to be left open so they could easily write sequels. Revenge of the Creature makes the Creature even more sympathetic by having him captured and put on display at an Oceanarium. Obviously he escapes and is somehow considered the bad guy. It is the first 3D sequel to a 3D movie and features an uncredited Clint Eastwood. The Creature Walks Among Us is the third and last Creature film. This time the Gill-Man is horrible burned. He begins turning more human but at the same times misses the sea even more. It’s the only of the Creature movies not filmed in 3D. 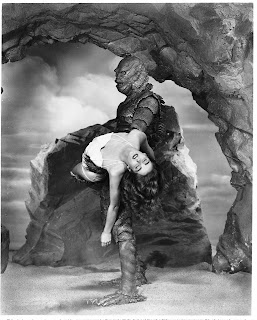 The Creature From the Black Lagoon has become my favorite of the Universal Monsters. Not only is it my favorite of the movies to watch, I think he is totally sympathetic. They wanted to the movie to be a beauty and the beast story and it shows. The Gill-Man just wants all of these nosey people out of his waters. Until he sees Julia Adams swimming at least; then he wants her to stay and everyone else to leave. And really, once you see her in that swimsuit I can’t say I blame him one bit.
Posted by Ken O at 8:00 AM