Take it from the guy with an octopus tattooed on leg; hockey is a sport full of strange traditions.  A common one is to have some item that is awarded to the player of the game.  It could be something as simple as a hat or an object they have to hold onto.  The point is the other players on the team are saying the winner played fantastic.  It’s fun for the other players too, many times this item is meant to be worn during post game interviews and appearances.  The Coyotes have upped their game to impressive levels. 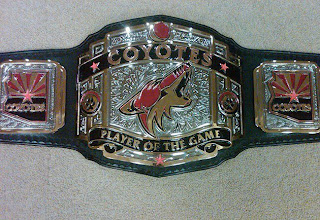 The Coyotes goalie Jason LaBarbera is a wrestling fan.  Last year he got with another team mate and wrestling fan, Keith Yandle and they decided that the Coyotes needed a championship belt.  They purchased one of those horrible looking John Cena era spinner belts and began awarding it to the player of the game. It is one of the worst looking professional belts they could have picked. 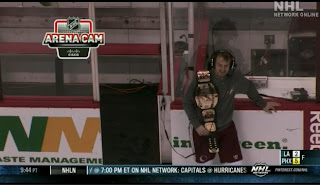 This year they had their own belt made.  That’s right, the Phoenix Coyotes have their own championship belt and it is absolutely stunning.  I’m not going to lie, if they started selling replicas I’d be pretty tempted to get one.  I’ve never been a Coyote fan, but this thing is just impressive looking.  And as you can see from the picture above, the winners are wearing them to after game interviews.
Posted by Ken O at 11:12 AM