While he is more famous for Axe Cop, I’m a huge fan of Ethan Nicolle’s web comic Bearmageddon.  I wrote briefly about it last year when I made a cameo appearance.  If the name doesn’t give it away, Bearmageddon is about bears attacking humanity.  There is a lot more to it of course, there are mutant bears and other things going on, but when you boil it down to the basics it’s about bears attacking people.  This past week it seems like Bearmageddon is closer to reality than anyone thought.

In the past week there have been seven different bear attacks.  They aren’t just happening in one area either, these attacks happened in five different states.  The attack getting the most attention is that of a 12 year old Michigan girl who was out jogging when she was attacked.  The girl played dead as the bear attacked her.  It left scratches on her face and deep gashes on her legs that required stitches, but she survived the ordeal.  She quickly made it to a neighbor’s house and was able to get medical attention.  The attack in Alaska had the victim waiting in the wilderness for 36 hours before he could be picked up for medical attention.  The news is reporting that he is currently in stable condition.  There aren't many details in that attack, but I have to wonder which did more damage; the initial attack or going so long without any help. 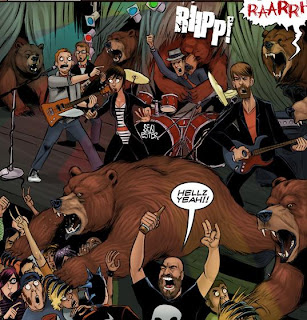 Bear fatalities in North America are actually pretty rare.  Attacks like the ones happening this week are more common.  Sure the clawing and biting may not be enjoyable for the victim, it isn’t usually fatal.  Bear attacks are on the rise, but considering their habitat is shrinking that is hardly surprising.  So why have there been so many bear attacks this week?  Partly because everyone is on vacation; most of the attacks have been on campers, hikers, and hunters.  Who would have thought?  If you go looking for nature it just might find you instead.
Posted by Ken O at 8:41 AM