(Hey Ken, why are there two posts today?  Tuesday's update is posting early because I'm too pissed to wait another day).
Sunday night Discovery kicked off Shark Week.  It should be very obvious to anyone who spends any time on That F’ing Monkey that I love sharks.  I look forward to Shark Week every year and I’m excited that my birthday usually falls during the week.  That said I don’t think Discovery Channel’s offering is perfect.  The shows are too focused on the great white and shark attacks in general.  Considering how many shark species are threatened there should be a much larger conservation message.  I was prepared for those concerns; I wasn’t prepared for last night’s offerings. 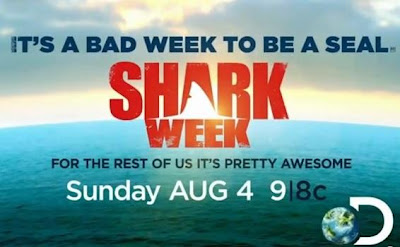 The first show of the night was Megalodon: The Monster Shark Lives.  Had this been a documentary about the prehistoric shark I would have been thrilled.  A shark that measured between 46 and 59 feet is ridiculously cool.  Instead this show was full of “found footage”, bad CGI, and misinformation.  Much like the mermaid special they ran, Discovery presents this information like it is fact.  I stuck it out for half an hour, hoping I could find something redeeming in this special but it defeated me.

I understand you may be confused at this point.  I’m the guy who loves Sharktopus.  I’m so excited for Syfy’s Ghost Shark that I can barely contain myself.  Why am I so upset about another channel running a shark focused mockumentary?  It all has to do with what channel it’s on.  Discovery channel is supposed to celebrate how amazing the Earth is.  It’s there to remind us how cool science it.  This is the channel that ran those wonderful “The World is Just Awesome (Boom De Yada) commercials”.   From whale sharks to dwarf lantern sharks, all of them are cool.  You don’t need made up flimflam to make an exciting shark special.

I look forward to the rest of the week but I’m really let down by Shark Week’s start.  You’re better than this Discovery channel.
Posted by Ken O at 4:44 PM