Happy Flash Friday everyone!  I had really wanted to post this last week, but sadly real life kept me from getting my order on time.  Ultimately that may have been a good thing, because I’ve had more time put my thoughts together.  Mighty Micros are a new Lego line that started showing up on store shelves this month.  For around 1o dollars you get two very small, almost kart-like vehicles and two mini-figures with short leg pieces.  The current wave contains both Marvel and DC characters; although we’ll be talking about the Flash set today. 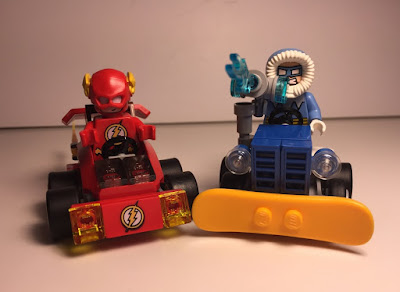 The first thing you have to remember is these are small sets.  To get two vehicles at such a low price point they had to keep them pretty simple.  The Flash set totals 88 pieces.  That’s 88 pieces split between two figures, two vehicles, and accessories.  Flash gets a tiny race car and Captain Cold a tiny snow plow/tractor.  The Flash symbol on the front of his car is a printed piece; in fact there are no stickers at all in the set which was a really nice surprise.  Both vehicles in this set are pretty sturdy and roll around well.  If you have the urge to really build something out of Lego, these aren’t going to satisfy that, but they are fun to zoom around your desk. 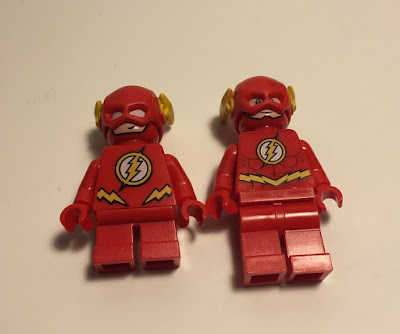 For a Flash fan that isn’t normally interested in Lego this seems like a great set to grab to get a cheap Captain Cold and Flash figure.  Before this Flash was in two sets a Riddler themed set that ran about 20 dollars and the Grodd Goes Bananas set that was about 60.  Captain Cold was only available in the 60 dollar set.  The Might Micro figures are not the same as the ones that came in those sets though.  Besides the fact that the figures come with the short legs that are usually used to represent Lego children the face and chest designs are almost more simple and cartoonish.  The full sized Flash figure has a smaller lightning bolt symbol and detailed muscles on his chest print.  The Might Micro has a much larger symbol and belt print. 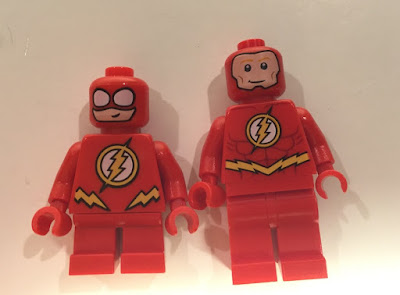 The other big difference in the Flash figures is the face.  The full sized Flash has visible eyes when his mask is on.  The Might Micro has white eyes.  Between the white eyes and the split belt I can’t help but feel the figure was influenced by the Bruce Timm Justice League run.  I don’t have any facts to back that up, it just seems likely. 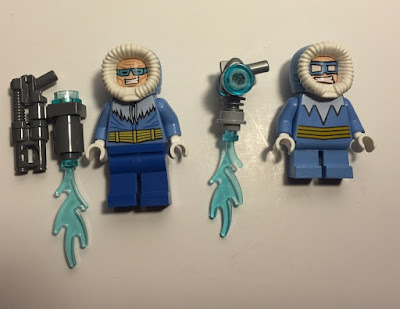 Much like the Flash, the two Captain Colds are very different.  Let’s talk cold guns first.  The full sized gun is a gigantic collection of thrown together pieces that in my opinion tries to do too much.  The entire lower section cold be left off and it would only improve the look.  The Might Micro cold gun is a ray gun with a few clear blue bricks attached to it.  The large Captain’s torso is done very realistically while the Micro’s is again cartoony and simplified. 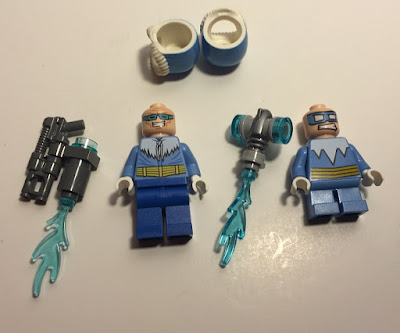 The full sized Captain Cold’s face was always a little wrinklier than I wanted, but was otherwise very good.  The Micro version is cartoony but isn’t so over the top.  Regardless of the design, both figures are instantly recognizable as the captain.  The parka hood on both figures is identical.

The Mighty Micros are a very fun line.  At the price it’s hard not to recommend them.  But I did want to show off the differences between the minifigures.
Posted by Ken O at 10:23 AM