The Star Wars cartoon Rebels is a big, big hit in my house.  It shouldn't come as a surprise to anyone that knows me that I love the main ship on the show.  When the first images were released I didn't care for it.  The odd angles and design elements shoved together were a little off-putting.  As I watched the pilot episode I quickly grew to love the design and watching the ship in action.  I was extremely excited when Fantasy Flight announced that they were creating the Ghost for use in their table top miniature game, X-Wing. 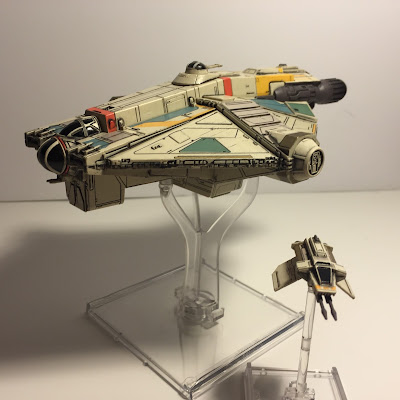 For those unfamiliar with X-Wing: The Miniature Game is game where players form small fleets of ships representing the Empire, the Rebellion, or a criminal faction known as the Scum.  Players maneuver their ships in space combat and try to either fulfill some scenario based objective or just try to eliminate the other player's ships.  Today's update is going to really talk about how the Ghost preforms in game.  I haven't had the change to even use it once yet.  The set comes with enough pieces and cards that it will take a few games before I really get a good feel of the piece. 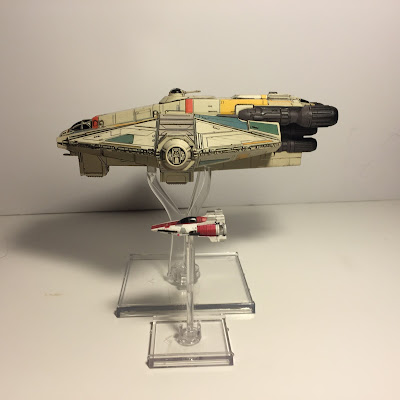 What I wanted to show off was just how nice the model looks.  The Ghost is huge compared to other ships and the small details really shine through on it.  The package comes with both the Ghost and the Phantom but I've also used an A-Wing in one of the pictures to show off just large it is.  Unlike Warhammer, X-Wing miniatures come pre-painted.  I've heard about other people having issues with badly painted pieces but I've never seen it.  The paint on the Ghost looks far better than I could have put together. 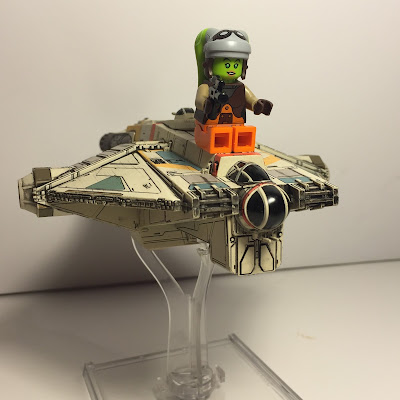 The surprising thing is that the model is hollow.  When looking at it you expected it to have some weight to it.  The model is super light, which is a good thing considering its size.  It already has to use a different flight stand than the other ships if it weighed more it would have to use something even larger.  I should point out that the Phantom doesn't actually dock into the Ghost model.  Instead the Ghost is sculpted to already have a Phantom back there.  Expect another Ghost article in about a month from now once I've gotten to do more than fly it around my kitchen making "pew pew" laser sounds.
Posted by Ken O at 7:00 AM