Yesterday’s update was about a Lego version of Rude Boy and the Ska-Tastics. Tthose familiar with Scooby Doo Mystery Incorporated may have been wondering where the musical counterpoint to the undead skankers were.  So today I present a Lego version of the Hex Girls.  To be honest, the Hex Girls were originally the only band I was going to create in Lego form, but as I started working on them I decided it would be fun to recreate both bands in the episode Dance of the Undead. 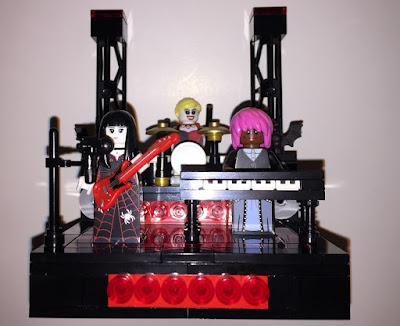 Much like the Rude Boy display this stage is modeled more to represent the theme of the band than it is an accurate depiction of the rooftops used in the episode.  This one is still a work in progress too.  The two bright red areas have changed a couple of times and I have the pieces for two more versions.   Dusk, the drummer, also has the wrong hair piece.  The blonde pigtails that I need won’t be available until September when series 16 of the Collectable Minifigures is released.  It’s hard to see in photos, but the stage actually has a clear red line bordering the edge.  It helps to offset all the black and I love the look of it. 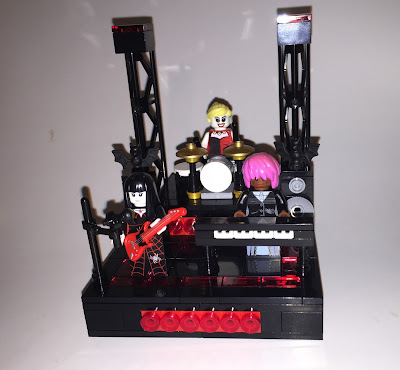 I spent a ton of time obsessing over how to bring the Hex Girls into Lego form.  The first thing I had to figure out was the version.  In the classic Scooby Doo look they all wear vampire fangs.  Luna, the keyboardist, has a skin color that seems to change a little between appearances too.  Because I love Mystery Incorporated I decided to do that version.  Even using that as a guide the girls changed up their appearances a few times in their two episodes.  As much as I wanted them there was no way I could make the Dia des los Muertos versions with stock Lego parts. 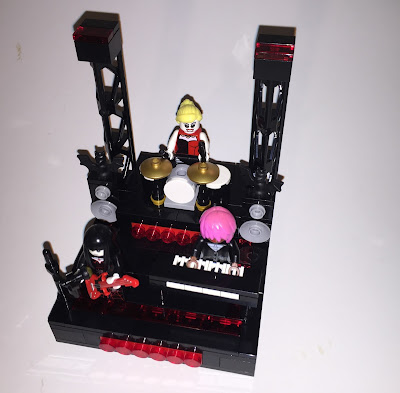 Once I figured out faces and hair that would work I had to figure out torso and legs.  Finding a perfect match for these things was sadly impossible unless I wanted to print my own stickers.  So I really picked things that I thought would match, even if it isn’t a perfect representation of what they wore on the episodes.  I’d like to do a Crush minifigure to represent Daphne when she joins the band, but I don’t even know where to start because of how little she wore.  If I ever figure it out I’ll post an update here.
Posted by Ken O at 9:21 AM