It’s Hangover Thursday, how’s your head? Mine is clear this morning, I’m saving all my drinking for later this week when all the holiday shenanigans kick off. I might be brave enough to bust out the Tom and Jerry recipe this year but only time will tell.


Earlier in the year I showcased an artist who was making beer logos using the various factions of Game of Thrones. These types of designs are all over the internet and usually pop up on sites like Tee Magnet and Shirt Woot. I’m always divided on these things, I love the creativity in some of them but it is also strange to see someone selling things based on a licensed property that they have no claim to. Luckily I won’t have to feel bad when I enjoy an Iron Throne Blonde Ale. 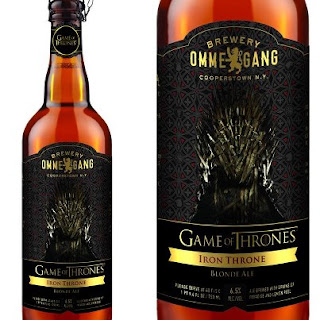 There are three more beers in the Game of Thrones line that are in the works. Ommegang is a good brewery though and they aren’t rushing this. The second beer won’t debut till fall and the other two beers probably won’t be released until the next seasons of the show are released. It’s a smart move, it shows they are actually thinking about the product and not just slapping new labels on existing brews.

A big thank you goes out to Carlos who sent me a heads up on this one.
Posted by Ken O at 11:07 AM