Today we’re going to take a look at the first episode of Visionaries: Knights of the Magical Light. Visionaries were a Hasbro toyline that launched in 1987. Holograms were popular at the time, so the Visionaries were trying to capitalize on that. The toyline, cartoon, and comic book were all scrapped after the first year. I never had any of the toys, but I remember when they were released and while I remember the cartoon being on TV, I didn’t remember it being this strange. 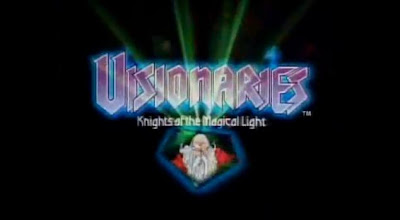 The episode begins by telling us that the people of the planet Prysmos live in a time of great technology. It continues to say that they’ve mastered all forms of energy and have lived in comfort and ease for 7,000 years. We’re shown this with all sorts of futuristic looking cityscapes and crazy vehicles. The realigning of the “3 blazing suns of Prysmos” caused all technology to fail. Cars stopped, aircraft fell from the sky, and all communications went dead. The narrator says that years past, but it doesn’t say how many. Considering the next scene has everyone wearing medieval armor and living in castles you would think that hundreds of years had passed. But the characters were actually alive during the age of science, so I have no idea how they changed so quickly. 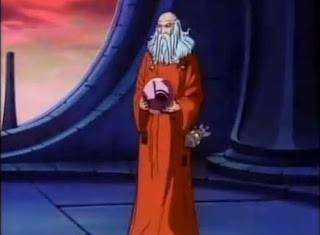 Leoric is the prince of New Valarak. The comic book identified him as the old mayor during the age of science. So when shit stopped working, Leoric decided to make himself royalty. Trying to take over the city is Darkstorm. Both of these leaders are frantically searching for a weapon that will give them an edge in defeating their adversary. The wizard Merklynn visits both leaders and invites them to his shrine so he can teach the knights magic. The really name him Merklynn too. I’m not making this shit up. Also, take a close look at the crazy rocket on his belt. Moving on, Leoric seems open to the idea, while Darkstorm sends Merklynn down his trapdoor. Once Darkstorm hears that Leoric is going on the magic quest, he decides that he better do the same. 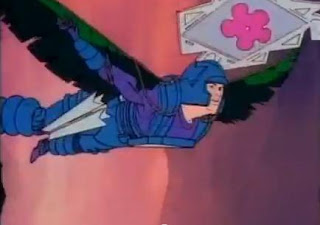 So knights from all over Prysmos show up at Merklynn’s. He states that all the knights who can pass the trials will be given the gift of magic. There are a lot of cannon fodder knights in these scenes, so you know that a bunch of them will be dying from traps. A simple guide from telling the good guys from the bad guys, all the bad guys have beards . I have no idea why. It isn’t just Merklynn’s traps that are stopping the knights, Darkstorm and his flunkies make sure no one can follow them as they go. He cuts the bridge out from under some of the other knights. One of those knights is Arzon, who while hanging on the side of the cliff makes working wings out of the plants around him. He then flies to safety. 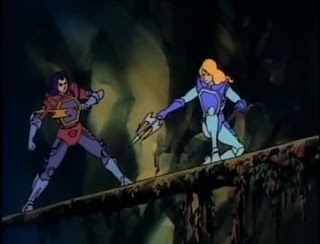 The assorted knights each use their defining trait to get around the traps. Witterquick uses his speed to sprint through a trap. Leoric uses his bravery to face down a giant stone golem. We are also introduced to the Visionaries’ ladies; Galadria and Virulina. You can tell Virulina was evil since she was about to stab Galadria in the back. From their comments, it’s apparent they have a history together. They both fall into the water. Suddenly it’s a wet armored shirt party! To their credit, the females in Visionaries don’t wear chainmail bikinis; they have full suits of armor. 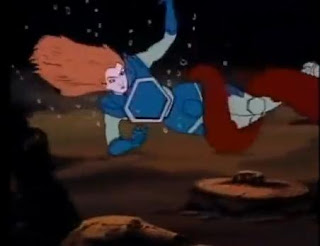 The pair is attacked by a giant octopus. Virulina swims through an underwater exit and closes the gates before Galadria can follow her. Galadria has to fight off the octopus by herself. The above picture is for you Michael May. Galadria manages to drain the pool/lake/thing and she is able to escape as the octopus is being dragged down by the whirlpool. Very quickly the show goes through some more “character pieces” for the knights. One evil knight scares off some no named knights by cutting down an hornet’s nest and drops it on them. Two powerful warriors meet up and chase each other. 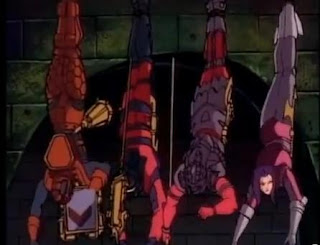 Darkstorm finds four of the evil characters all caught in the same trap. He tells them that he’s willing to help them as long as they all swear loyalty to him. Some members of the group are more willing to do so than others, but they all join him and he cuts them down from their ropes. Chris Latta voices one of Darkstorm’s new members. Never trust Chris Latta. The group of evil knights ambush Leoric and his two friends. The evil group is named the Darkling Lords during the combat. At the same time the unaffiliated heroic knights see the fight and join Leoric. Merklynn stops the fight and tells the knights there is magic enough for everyone, they just have to open the door to the shrine now.

What happens next? When do the holograms come into play? Will the girls wrestle more tentacles? You’ll have to check back tomorrow for a special Sunday update of That F’ing Monkey to find out!