Welcome back to our look at the Visionaries’ first cartoon episode. As a quick re-cap from yesterday’s insanity we learn that the world of Prysmos lost all of its technology when its three suns lined up. The world plunged back into medieval times. Prince Leoric and his heroic friends are fighting Darkstorm’s Darkling Lords as both groups try to reach Merklynn’s temple so they can gain the power of magic. Whew. I think that covers it all. 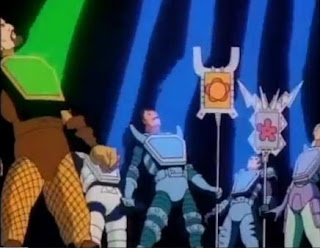 Cryotek goes to break down the door only to have a strange bit of special effects go off. Flashing lights, lighting over the earth, and it looks like everyone is in a tornado. After a couple of seconds we see everyone still standing in the room so they just walk through the now broken door. Inside is Merklynn tells them they were the only knights with “the vision to reach the shrine.” Ah ha ha, that Merklynn. He then flat out calls them the Visionaries. Merklynn goes on to explain that in exchange for his magic he was occasional require tasks from the Visionaries, but he leaves out the details. He tells them to prepare themselves to take the totems they have earned. 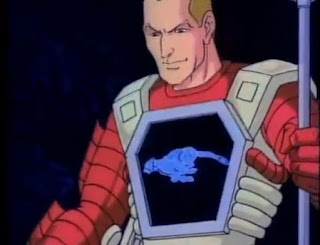 Totem role call! Ass-hat Azron with the plant wings earns an eagle as his totem! Cindarr receives the gorilla because of his climbing and brute strength. Witterquick gets a cheetah because he is fast and agile, and because he has the word quick in his name. Chris Latta, I mean Cravex earns the phylot. The phylot is the only airborne scavenger on Prysmos. It pretty much looks like the mother fucking pterodactyl. Ectar gets a fox because he was able to sense an ambush. Mortdredd gets a beetle because he’s a bootlicker. Seriously, Merklynn flat out calls him out as a bootlicker. 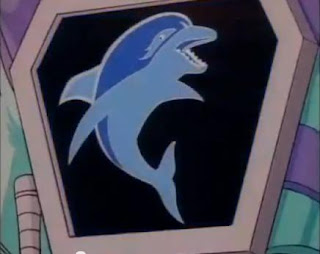 Feryl gets the totem of the wolf for his amazing tracking skills. Feryal sounds just like feral. Clever right? Virulina becomes a shark because she showed a killers instinct while underwater. The only reason she was even in the water was because her and Galadria fell into it. It’s not like they had some affinity with water. Anyway, Galadria receives the dolphin because she has a prehensile penis. No wait, she’s a dolphin because that’s the most intelligent animal in the ocean. Lexor is given the Armadillo for his cowardice. Cryotek is the bear because he likes leather pants and a hairy back or because he’s strong and tough. Take your pick really. 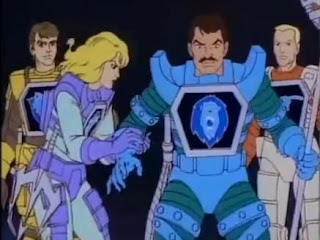 Reekon (pronounced recon) is a master of stealth, so he becomes a lizard. Leoric becomes that lion because of his courage and leadership, not because his name starts with Leo! Finally Darkstorm becomes a mollusk for his climbing and slimy-ness. The fucking bad guy leader is a god damn snail. I’m seriously disappointed Merklynn. The characters can become these totems but Merklynn warns they are powerful and sometimes uncontrollable. Then Merklynn lays out the best pickup line every, “Now dip your staffs into the pool and you will see a wondrous transformation.” Those who forgot to bring a staff are told that they’ll have great powers that they’ll figure out later. These staff-less characters became the vehicle drivers for the toy line. Anyway I’m not going though whose staff gets what power because just typing out all the totems made me want to bang my head against the desk. 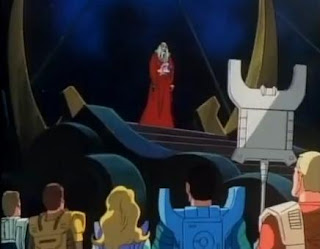 Like a true drug pusher Merklynn tells them that each time they use the magic in their staff it will become weaker and they have to come back to him for a recharge. Even Merklynn seems tired of all of this and tells them all to go the fuck home and stop bothering him. He then flushes them all out of his shrine with a magic whirlpool. All the heroes and villains are now deposited outside the shrine with all sorts of new shiny weapons. I wonder what is going to happen. Oh I know, maybe they’ll start fighting. Darkstorm stops the fight and proposes that magic only be used to preserve the peace on Prysmos. No one believes that he would be the one to say such a thing, but the good guys all agree. Darkstorm tells his Darklords that it is easier to be evil and won’t follow the truce but he knows the good guys will. 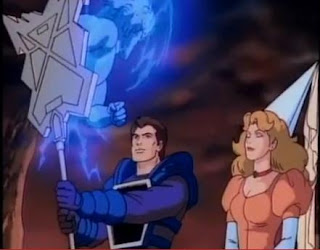 Then we have a jarring jump where Ass-hat Azron is rescuing a princess stuck in a hole. I really can't explain this one. She quickly convinces him to show her his staff if you know what I mean. His magic staff. Anyway, he uses up the magic charge on his staff of wisdom to impress a girl. His staff is smarter than he is, it quickly outs the princess as Virulina. Virulina then rips off her princess dress and wig to show that she’s been wearing her armor under there the whole time. Virulina attacks and suddenly the episode is to be continued!! Episode 2, “The Dark Hand of Treachery” picks up right where this one ends but we've talked enough Visionaries today. Keep an eye out at That F’ing Monkey, you may just see that episode reviewed next weekend.
Posted by Ken O at 8:00 AM