Sometimes I shouldn't be allowed near children’s toys.  As we were putting my son to bed last night I saw the Duplo Batman figure next to the circus scene and I knew what I had to do.  Batman is part of the licensed DC Comics Duplo sets that started coming out right before Christmas.  The police officer and the circus stuff all come from the other sets we have littering our floor. 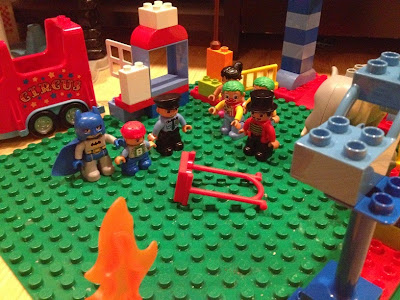 Also I know it would be better if it had been Bruce Wayne and not Batman with the young Dick Grayson.  But I had a pretty limited pallet to work with here.  I figure it still gets the point across. 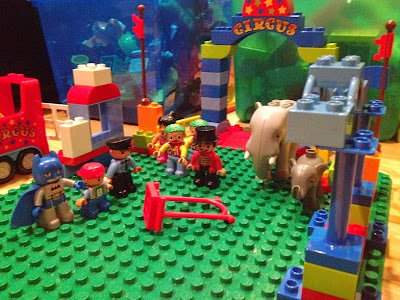 For the record the only DC heroes so far with figures are Batman and Superman.  By the time they get around to Flash my son will have graduated to normal sized Lego.  Of course he could be in high school and I'd still buy a Duplo Flash.
Posted by Ken O at 7:41 AM