Marvel Premiere 16, (1974)
In the first installment we looked at the first appearance of Iron Fist.  Today we take a look at the next part of his story.  When the first issue left off Iron Fist was still in K’un-Lun.  He had passed all his challenges and would either become immortal or choose death.  So considering where the first left off, it’s odd to see the next issue opening with Iron Fist walking down the street in New York.  We learn that he is in New York to kill someone, but before the story goes any further Iron Fist is lured into an alley where he is attacked by four thugs.  Before the fight they reveal there is a 10,000 dollar bounty on Iron Fist. 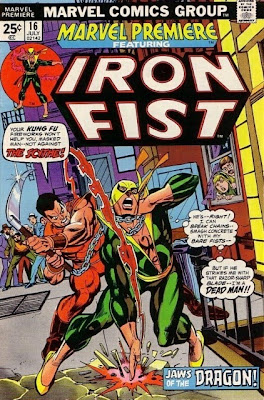 During the fight Iron Fist flashes back to his time in K’un-Lun.  He remembers being taken into the city where he is introduced to Yu-Ti.  The so called August Personage of Jade tells the young Rand he is welcome in the city and asks him what he desires.  Danny tells him he wants revenge.  Yu-Ti advises that revenge cuts both ways and instead introduces Danny to Lei Kung the Thunderer.  Lei Kung becomes Danny’s trainer in the martial arts.  Years pass as Danny trains.  To prove his training is complete Danny must grab the crown off this rattlesnake that apparently lives on a pole.  No one seems to think it’s odd that a snake is just hanging out and wearing a crown.  Finally Danny is able to grab the crown, but his achievement feels empty.  As he beats the gang in the alley he remembers how Yu-Ti tells him that he with his skills he may be able to claim the power of the Iron Fist. 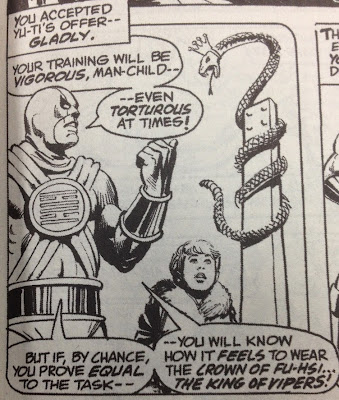 Danny goes to a temple in K’un-Lun and shouts out a challenge to the dragon, Shou-Lau the Undying.  Shou-Lau’s molten heart has been torn out; only a scar remains where its heart was.  A scar that looks just like a winged dragon, even though Shou-Lau doesn’t have wings; he’s more of a serpent dragon.  Anyway to beat Shou-Lau Danny squeezes the dragon; breaking the mystic link from the creature to its heart, in the process it burns the scar shape into his chest.  That’s right; the Iron Fist symbol is more a branding than a tattoo.  With the dragon defeated he finds the molten heart and plunges his hands into it until they began to glow.  He has become Iron Fist. 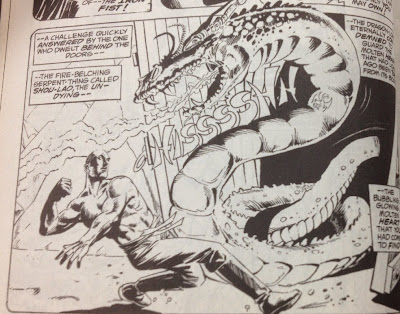 Back in the present Iron Fist is attacked again, this time by a lone assailant named Scythe.  Scythe is armed with a sickle that has a ball and chain on the other end.  During this fight Iron Fist flashes back to the cliff hanger from the last issue.  Yu-Ti takes him to the Tree of Immortality.  There he tells him that the portal to Earth will be open tomorrow.  It opens every 10 years.  Iron Fist has to choose between returning to Earth or staying in K’un-Lun.  Iron Fist states that he still wants vengeance on the man that killed his father.  Yu-Ti tries to talk him out of it and reveals that Yu-Ti is Iron Fist’s uncle.  Seriously it’s been 10 years and he never mentioned it to the kid?   You would think that would have come up sooner. So Iron Fist leaves K’un-Lun on a mission to kill Harold Meachum.

With the majority of his backstory finally told, we go back to the fight with Scythe.  This fight follows what will become a common format; in fact we saw it already in the first issue.  Iron Fist is already tired from his first fight.  He was taken unaware in the second and is having a hard time against Scythe.  Finally he concentrates on his Chi, hits the bad guy with his Iron Fist, and wins.  The issue ends with Iron Fist walking off to find the Rand-Meachum building.

Those first two appearances are just dense with information.  The next installments of Iron Fist 101 will finally be able to cover multiple issues.  Yu-Ti and Lei Kung the Thunderer are pretty important characters in Iron Fist.  Lei Kung will be an ally for years to come.  Yu-Ti’s story is going to take a lot more twists and turns as we go but he is always an interesting character.