Lately I’ve been playing a lot of Grand Theft Auto on the Xbox One.  It took me a while to pick up the game because I was so bored by the last one that I never finished it.  The new one has me sucked into both the single player version and the multiplayer.  But it is not the game that I’ve spend the most time with.  No, that honor goes to Marvel Puzzle Quest.  When I’m walking around with my phone at 22% charged it’s because of this game. 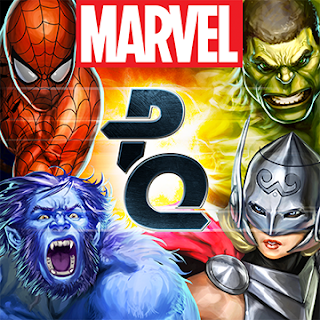 Available on iOS, Android, and PC Marvel Puzzle Quest is one of those freemium games that actually works.  MPQ is a continuation of the Puzzle Quest series.  I had the original Puzzle Quest on my Xbox 360 and spent hours upon hours playing it.  The concept was simple, it looked like any other jewel matching game but it threw in RPG elements.  You had a character with different abilities.  All of these spells and powers cost colored points.  The only way to get these points was to match gems of that color.  Added to that, each match and power would cause damage to your opponent and vice versa. 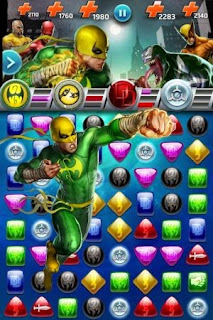 Marvel’s version is very similar but instead of only having one hero though put together teams of three.  Each of the characters has their own powers and finding a group that works well together is part of the fun.  As you play you unlock random packs that give you more characters to use.  You can use real money to purchase more random packs and to purchase my space on your roster, but it isn’t a crippling pay wall. 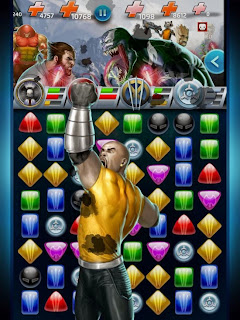 The game is constantly getting new character updates too.  The randomness of the rewards can be frustrating at times but the game is a lot of fun.  While I did say earlier that the game doesn’t require you to pay, I did want to mention I have purchased some of the Hero coins.  I felt it was the best way to show support to the game that has captured so much of my attention.  The coins went to expanding my roster slots; I have to be ready for when I eventually pull a Luke Cage cover.  I feel like already having Iron Fist should increase my chances for a Cage.
Posted by Ken O at 8:13 AM