In the Magic Kingdom no one can hear you scream

My niece is staying with us for a few days. So my wife and I decided to take her to Disney World; or as my wife would correct me, the Magic Kingdom. See, my wife is a Disney fanatic. To her it brings back thoughts of yearly trips down from Chicago with her family. I’ve lived in the Orlando are most of my life, so when I think of Disney I usually think of long lines, screaming kids, arguing parents, and well you get the idea.

While there we saw the construction walls up for the new Fantasy Land upgrade. Apparently there will be separate areas for all the princesses. Fantasy Land is an overcrowded cluster the way things are now, so I see this as a good thing. My wife, who still yearns for the return of 20,000 Leagues and Mr. Toad, isn’t sold on the idea yet. Her reaction got me thinking of the one thing I truly miss at Disney. The one attraction that made me grin from ear to ear, the ExtraTERRORestrial Alien Encounter. 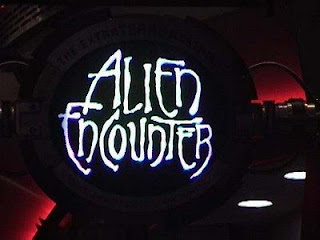 More TERROR after the break..

The Alien Encounter is a sad, sad tale of an attraction that probably didn’t belong in the Magic Kingdom. It wasn’t, “oh that statue of the witch turned around really quickly” scary; it was “holy shit did blood just splatter on my face” scary. It opened on December 16, 1994 and then was closed on January 12, 1995. After being reworked it reopened on June 20, 1995 only to finally close its doors on October 12, 2003. Since then it has been refurbished into Stitch’s Great Escape. So what made it so great?
Built in the old Mission to Mars Theater, Alien Encounter was an attraction that you mostly sat through and watched. There were some pre-show queuing areas that filled you in on the story. The first introduced you to the company X-S Tech. Just from the name you get the feeling of what kind of company it is. In the second area you meet S.I.R. the Simulated Intelligence Robotics. He showed you how X-S Tech’s teleportation systems worked. There were two version of S.I.R. when the ride first opened it was a sillier Phil Hartman experience. After the brief closing S.I.R. was now more sinister and was voiced by Tim Curry. I remember both and preferred the second; I thought it gelled better with what was to come.
Finally you get to go into the main room. There are rows of chairs all facing the center of the room where there is a giant tube in the center. The chairs have shoulder restraints that lower when you sit down. Of course the teleportation display goes horribly awry and instead of the company CO, a nasty alien is teleported into the center of the room. The lights go out, the glass shatters, and you can hear the alien flying around you. When those lights went out it was utter chaos in that room, everyone around you was screaming. Many of the things used to enhance the experience are all over the theme parks now, but I don’t remember them before seeing them here. Moist hot air gets blown on your neck, the restraints press down on your shoulders like the monster is on top of you, the top of your head is touched by a flexible piece of plastic, and the best part of all; drips of water simulating blood.
The entire experience was intense. There were times on it that the screaming almost drowned out everything else that was going on. Apparently that was one of the reasons it was shut down the first time, to tweak the experience to make it easier to understand what was going on. Of course, people complained it was too scary and didn’t belong in the Magic Kingdom. And it was scary. The security detail supposedly on the catwalks above you gets slaughtered. It was too much for Disney though and the closed the ride. 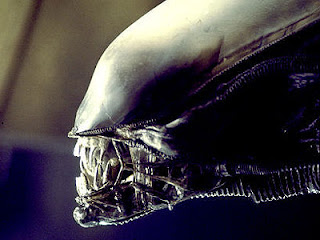 I wonder if it might have worked better at MGM Studios. Then I read on Jim Hill Media’s blog that the original concept had used the xenomorph Alien from the films and you would have been riding around the Nostromo shooting Alien’s like on the Buzz Lightyear ride. That there could have been a Colonial Marine ride where you’re gunning down Alien’s and it wasn’t made makes my soul hurt.

Despite what was there or what could have been, the attraction is still running. They turned S.I.R. into a fat cop robot. They replaced the alien with Stitch; which added numerous burping, spitting, and farting jokes. So sure the technology of the attraction is still in place but for me when it comes to aliens and the Magic Kingdom it’s game over, man. Game over.
Posted by Ken O at 11:23 AM

Email ThisBlogThis!Share to TwitterShare to FacebookShare to Pinterest
Labels: Disney