The Jonah Hex movie comes out this Friday and commercials are all over the TV. Earlier I talked about the different cartoon versions of Hex that are out there. I plan on seeing the movie Monday afternoon, so expect a review Monday or Tuesday. I’ve been a Hex fan for years, but I realize that there may be some people seeing that scarred visage for the first time. If they like what they see they may want to jump into the print version of the character. So over the next couple days I’m going to cover some great books that are fairly easy to pick up. 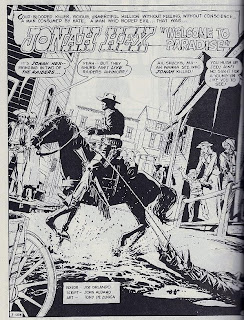 The first book that we’ll look at is Showcase Presents: Johan Hex, Vol. 1. The Showcase Presents books are fantastic deals. They may be in black and white, but the Hex book is 528 pages long. That is a whole lot of Hex for 17 bucks. In this book you get the earliest Jonah Hex stories, well before he even got his own series. The stories come from Weird Western Tales, although the first is listed as All-Star Western that book changed its name to Weird Western Tales with issue 12.
More leather slapping after the break.

So what do you get in this phone book sized collection of dust and grit? I’m going to go over the first story in the collection without giving away too much. You don’t get any origin story here, “Welcome to Paradise” tells you everything you need to know about Jonah. The beginning blurb is fantastic here, “Cold-Blooded killer, vicious, unmerciful hellion without feeling, without conscience….a man consumed by hate, a man who boded evil…that was…Jonah Hex.” The story is written by John Albano and art is by Tony DeZuniga. 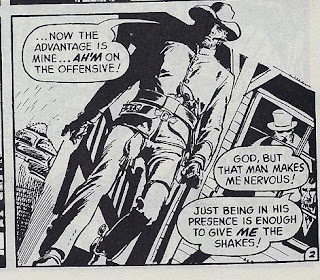 Jonah is in the middle of taking about a gang of outlaws, for money of course. After that introduction you don’t think he is going to do it for free do you? One of the great parts of this story is Jonah is drawn with a shadow cover his scars for most of the story. I wish I could go back and read this before I knew of the character. I’m envious of people who say that reveal and were surprised by it. 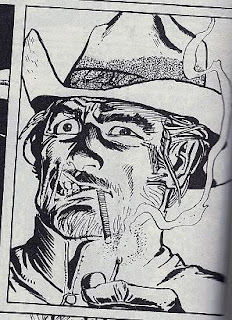 In the story Hex is without a doubt deadly, but he also ends up showing more compassion then the so called “civilized folks”. It is a reoccurring theme that is one of the reasons I love the character. People want Jonah to defend them or kill the criminals around them, but they don’t want him living next door. He is pretty much forced to continue on his path. 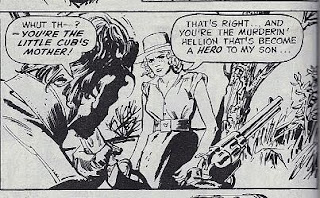 The book is fantastic. You know those people that don’t understand why you read comics? Drop this in their hands. They’ll understand it isn’t all spandex and cheesy grins. DeZungia’s Hex is as nasty looking as his women are beautiful. The action is brutal. All of the Hex stories are one an done.  So if you don't like something about one of them, maybe the next one will make you happy.  It is a refreshing read after all the giant events and crossovers that are happening in modern comics.  Here is a preview for tomorrow, the current Jonah books do the same thing!

Sadly, the book is labeled Volume 1, there isn’t a Volume 2. Hopefully after the movie there will be enough interest to make that happen. Another thing to be aware of, the last chunk of the book isn’t actually made up of Jonah Hex stories. You get the story of Outlaw and then some odd Billy the Kid stuff. They are still interesting reads, but you’ll wish the space was taken up with more Jonah. Tomorrow, we’ll look at a more current Hex story.
Posted by Ken O at 9:32 AM