War for Cybertron comes out on June 22. Because I’m so excited about a game that is calling itself a G1 prequel, I’m counting down my top five favorite Transformer toys from my childhood. Number 5 was Thundercracker the only Decepticon to make the list, so if you were hoping to see Megatron you’ll be disappointed. Although as a kid I did get in trouble at an airport because of Megatron, but that is a story for another time. I mentioned how Thundercracker was my first full sized bot; Sideswipe was my first Autobot. 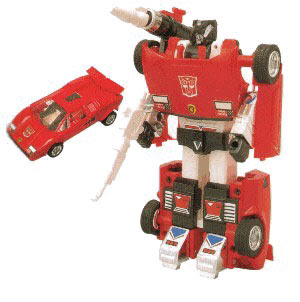 Sideswipe transforms into a red Lamborghini Countach. When he switches to robot mode not only did he get a gun, but he also had a shoulder mounted missile launcher. The missile launcher I had didn't fire at all, the spring must have been messed up.  In the cartoon, I don’t remember him getting much of a spotlight. Unlike the last Transformers cartoon the starting Autobots had a pretty large cast, so lots of characters were extra soldiers filling in the background. So Sideswipe and his brother were pretty much filler. Wait. What? Did I just say brother?
More Sideswiping and brothers after the break…

Sideswipe’s File card:
Function: Warrior
“I don’t break rules, I bend them----a lot.”
Sideswipe is nearly the equal of his twin brother Sunstreaker, in combat arts, but less cold-blooded. Relishes a fight to the finish with an opponent. Uses underhanded tactics when absolutely necessary. Arms act as powerful pile drivers. Flies for up to 2 minutes with rocket backpack. Fires flares visible for 18 miles. Rash actions often lead to injuries to himself. Takes them all in stride. 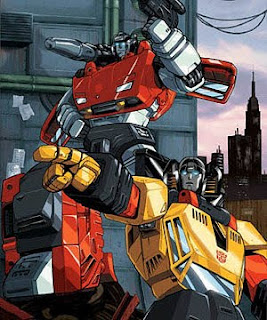 That’s right. It says Sunstreaker is his brother. Robot brothers. Something about the ridiculousness of that enthralled me as a kid. They were robots and brothers!! Sunstreaker was also a Countach although his toy used a different mold so even in car mode they looked different. The most current version of the toys used the same mold but had them transform differently so the robot modes wouldn’t look the same. I thought it was a nice touch. 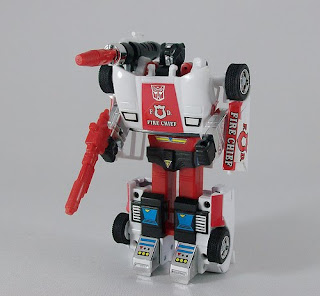 But wait, the family relation didn’t stop there. In Japan wave 1 and 2 of the Transformers came out at the same time. And over there Red Alert was Sideswipe’s brother. They were the same toy mold. Red Alert was just painted differently and had a light bar added to the top of his roof. Because you know, firemen drive Lamborghinis. So maybe he’s a stepbrother? Over the years the comics have explained how they terms can be used with sparks and protoforms, but I’m not going to jump into all of that here. 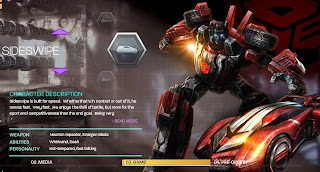 Sideswipe is the last person on my countdown that is confirmed in War for Cybertron. I won’t be able to play my favorite Transformer ever, but at least I’ll have a bot on each side of the war that I like. Sideswipe is a Scout class in the game, so he’ll be fast and fragile. Expect the countdown once more this week and it will wrap up late next week.
Posted by Ken O at 9:13 AM