War for Cybertron is only days away from release so we are getting close to the end of my Transformers countdown. Looking back at my favorite Transformers as a kid we’ve already covered Thundercracker, Sideswipe, and Tracks. The toy line already had cars, trucks, jets, and guns; what else could a kid want? Oh yeah, dinosaurs! The Dinobots were huge when they came out. They looked fantastic. They were all done in the same color scheme, mostly a grey with metallic silver and gold, so they looked like a cohesive unit. My personal favorite was Dinobot Slag. 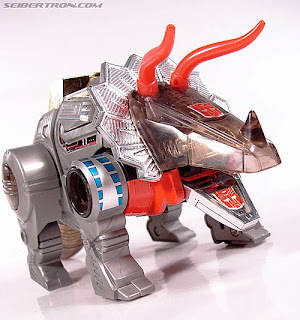 Slag transformed into a Triceratops which has always been my favorite dinosaur, so as soon as I saw him I knew I had to have him. Except when the Dinobots came out they were incredibly popular. You couldn’t find them on the shelves. Then one day after calling ahead to stores my cousin and I found out that Service Merchandise was getting a shipment in! We waited with my Aunt in the back of the store where there was this long conveyer belt. The Dinobots were in the back and they were going to send two of them down the belt. I was so excited to see those boxes, it seemed like forever. Then finally, we get the boxes in our hands and I could see I got...Sludge, the Brontosaurus. Sure he was cool, but I was so disappointed.  Luckily a month or two later I finally got Slag.
More Slagging after the jump.

Function: Flamethrower
“I have no need for friends, even less for enemies”
Enjoys melting enemies into pools of liquid metal. Like his fellow Dinobots, resents authority. Disruptive-often brawls with comrades. Shoots 3000 C flame up to 80 feet from mouth. Enormous strength-can shatter a brick building with his head. Uses electron blaster in Dinobot mode. Rash, no too bright. Nasty, mean-spirited…often the other Autobots won’t help when he’s in trouble. 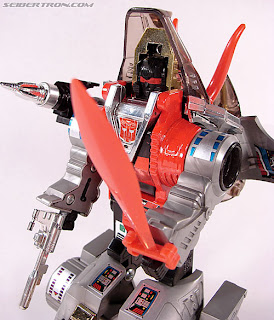 Wow. So we have a robot Triceratops that can breathe fire and is a complete asshole? No wonder I liked him. On top of that, he came with a gun, a sword, and a missile launcher. The missile launcher attached to his shoulder in both robot and dinosaur mode. The sword he came with was bright red, I always thought it looked strange but I guess it was supposed to be some kind of energy sword. 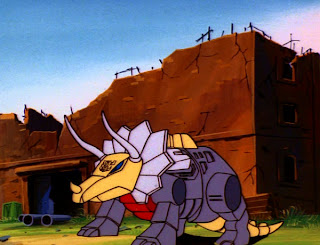 On the cartoon Dinobots were badass incarnate. They talked like Johnny Weissmuller starting most conversations with, “Me, Slag….”. On top of that they didn’t really listen to anyone but Grimlock, their own leader. They tore the Decepticons a new one any time they showed up. Sadly for Slag, Sludge, Swoop, and Snarl their leader was by far the most popular. As the series went on the others were pushed to the background as Grimlock got a larger role. 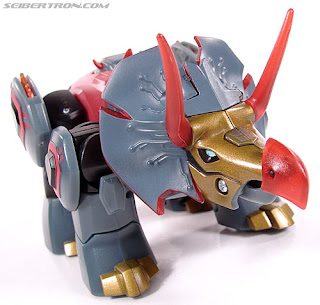 Slag ran into some interesting problems due to his name. In the UK and some other parts of the world it isn’t very nice to call someone a Slag. Makes his name even more fitting doesn’t it? Hasbro didn’t think so. Anytime they’ve released a new toy based on Slag, like in the newer Animated Series, he was named Snarl. So what will Snarl’s new name be? No one knows, he hasn’t had any new toys. In my mind he’ll always be Slag. Just like Sludge is a Bronto and not an Apatosaurus.

There is no word if the Dinobots will be getting any screen time in War for Cybertron, but I’d bet there is at least an Easter egg buried in their somewhere. Again almost all the pictures used in today’s list are from seibertron.com which is a great site for Transformers fan. You should check them out. We only have one more bot left in the countdown. Who will it be? You’ll have to check back later this week to find out.
Posted by Ken O at 9:45 AM