So have a drink you bastards

It happened again. I didn’t expect it to be a late night at the bar, but friends who almost never come out drinking any more started showing up. I couldn’t be rude and leave. I put another good chunk in my beer list too. Beers 75-81 are Jai Alai, Brooklyn Lager, Brooklyn Brown, Coors, Coors Light, Miller Light, and La Fin Du Monde. That last one was no joke either, seriously good stuff. 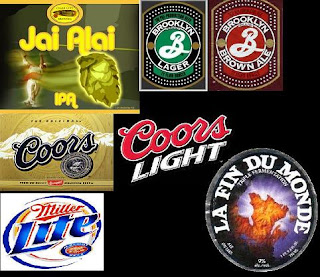 I’m probably going to skip the bar next week, but I already have something planned for Hungover Thursday. So your weekly dose of silly beer nonsense won’t be missing.
Posted by Ken O at 9:02 AM