Tales from the Brain Jar, #4

Can you believe we are still at Megacon 05? I’d already gotten a great Patrick the Wolf Boy and Mr. Monster sketch. It was only Saturday and I was still on the hunt to see if I could get another sketch. This is an interesting one, because the artist I approached was local at the time. When I commissioned the sketch, I did so knowing I wouldn’t get my book back that weekend. It would actually be a month or two later when I ran into him at a local comic shop signing. The thought of doing that now is extremely scary, but it should be said I have the utmost trust in this artist.

So who is this person I trust so much and what did he draw? Check it out after the jump.

Ethan Van Sciver and Murmur! You can see why it took a little longer then normal with the wall of brain jars. The horror bar had finally been set in my book. Ethan does enjoy the gory stuff, so I was glad the sketch was something he would enjoy doing. I had already know Ethan from a few other cons and have an awesome Flash piece from those times, so I wasn’t worried about leaving my book with him. 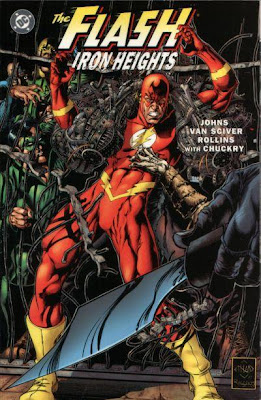 For those not familiar with the character, Murmur was one of the new Rogues introduced in Flash: Iron Heights. He has a strange blood condition that makes him immune to all blood-borne diseases or toxins. He normally cut out tongues, but I figured brains would be ok since it was the theme for the book. The character actually cut his own tongue out so he couldn’t incriminate himself any more.


Barry Allen was instrumental for putting Murmur in jail the first time.  I don’t think they’ve run into each other yet since Barry has come back from the dead.  I hope who ever writes the initial meet up makes the most of it.
Posted by Ken O at 10:08 AM