Happy Flash Friday everyone! After a couple distractions I’m finally ready to talk about the latest run of the Flash. I am not going to talk about the entire run in one article though. As I was reading I thought it would be better to talk about the series in two articles since there is a lot of ground to cover. Today we’re going to cover my thoughts on the series 0-6. I know issue 0 didn’t actually start the series, but that’s how I read it this morning. 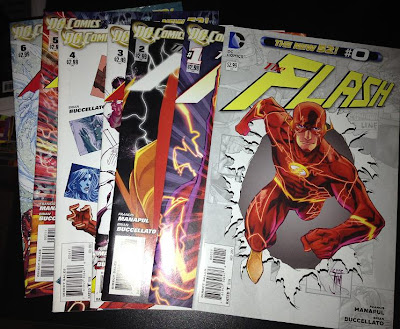 The first thing I have to say is this is just a beautiful book. I’ve always liked Francis Manapul but he really stepped it up for this book. The series is filled amazing panel layouts that actually remind me a lot of Eisner’s Spirit. The rest of the book looks great two, but when I’d get to a page with one of the dynamic layouts I’d just stop for a moment and admire to look of it.

The thing that probably surprised me the most is that I really like the Patty Spivot character. I know she is a character pulled from the past and dusted off, but really since the reboot she might as well have been a new character. She was really a blank slate and I didn’t think I’d like her at first. She fits with Barry well even if she doesn’t fully approve of his alter ego. 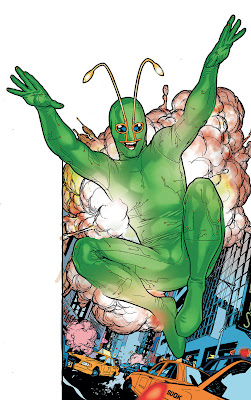 I know it wasn’t the creative team’s choice, but I really dislike the new Flash costume. It isn’t the chin strap or the new chest emblem either, I’m okay with those. I could almost live with the extra lines but two things about them totally ruin it for me. When the lines on his mask glow yellow he looks like an insect. Or a superhero based around an insect. He looks like Ambush Bug. Don’t get me wrong, I love the Ambush Bug, I just don’t want to be reminded by him every time I look at the Flash.

I really liked Mob Rule. Sure the way he generates new clones is a little gruesome, but the idea of an army of clones is a great one. Having him attack two different areas at the same time is a great way to throw something new at the Speedster. The end of the first arc gave him a great reason to hate the Flash and the nature of his powers will always give him reason to abduct scientists. I don’t want to see Mob Rule again for awhile, but I’d be happy to see him again. I fear for him in the hands of other writers though. I can imagine him being used to fill in the background for the next large villain gathering.

Since the Captain Cold arc is really in the next run of issues I’m going to save most of it for next week. I pulled these two captions from issue 6 though. I didn’t see anything in issue 6 that required Cold to have actually have powers instead of guns. More on that next week.

So far it looks like I really enjoyed the Flash doesn’t it? Fun new girl, beautiful art, and an interesting new villain; what’s not to like? I hate his new origin. The Flash used to fight crime because he thought it was the right thing to do. He didn’t need to be haunted by his past. I’m talking about Barry and Wally here. They enjoyed being Flash. If I wanted moping and angst over dead family members I’d read Batman or Spiderman. I think who ever came up with this idea missed the point of the Flash. It makes me sad and angry at the same time.