Happy Flash Friday everyone! Last week we talked about issues 0 through 6 of the latest Flash series. Today we are going to cover 6 through 12 and the Annual. I’m not going to be talking about issue 13 even though it came out this week; I just haven’t had a chance to get to my local store. If you aren’t caught up on the series, there will be spoilers below. 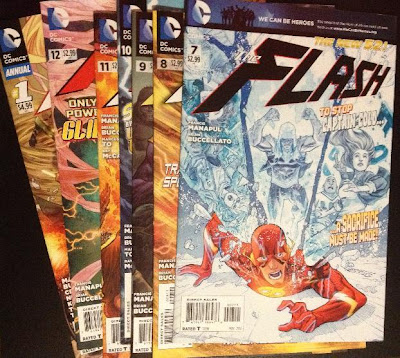 I’m going to start by echoing my statement last week and say that the new Flash comic is a beautiful book. Every issue has great dynamic layouts that are always a pleasant surprise. I have a new problem with the series now that we move into the second half of the run though and that’s the pacing. Even though I’m talking about 7 books it seems rushed. Stretching out comic stories just to pad out a trade collection sucks, but burning through your story ideas before you have a chance to really do anything with them doesn’t help either. 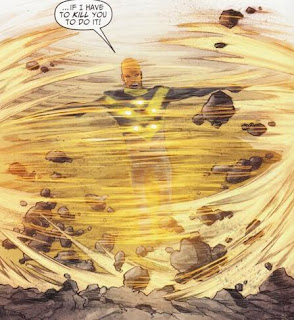 Let’s start with Turbine. He’s obviously been created to be a replacement for the Top. The costume is similar enough, he spins, and he’s named Roscoe. So in Turbine’s first issue the Flash jumps into the Speed Force and finds that Turbine has been trapped in there for years. Turbine’s snap from Flash is great to I want to kill the Flash happens so fast I thought I skipped a page. Sure Turbine is insane, but there should have been some buildup. I know Turbine is still free of the Speed Force and knows Barry’s secrets, but it still like there was a lot of lost opportunities in this story.

My biggest problem with this story arc is Barry’s decision to let the rest of the world think he’s dead. He jumps into this idea as quickly as he’s been bounced around from place to place. Barry Allen isn’t famous. He isn’t Bruce Wayne. If Barry spends some time in the Keystone dive bars, no one would know anything different. The new series has established that there are people that care about Barry, this playing dead thing just seems callous and out of character. 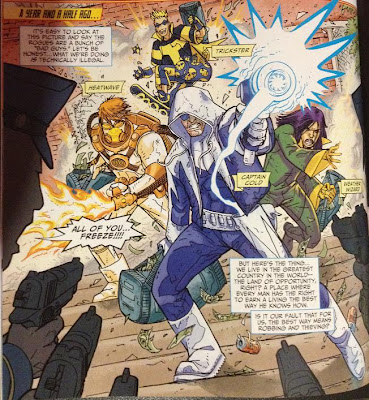 Wow do I hate the new Rogues. I don’t want to see Heat Wave as a burn victim. I’m not really sure what Glider is anymore. Mirror Master is back to being Sam Scudder and is Glider’s lover. In this arc we see how all of the Rogues went from using guns and wands to having super powers (didn’t we already do this with Underworld Unleashed?). The person who does this for them is an interesting twist, but the Rogues are as unhappy with the results as I am. The picture above is of the new 52 Rogues before they underwent there changes, I actually like the Cold and Heat Wave designs here. 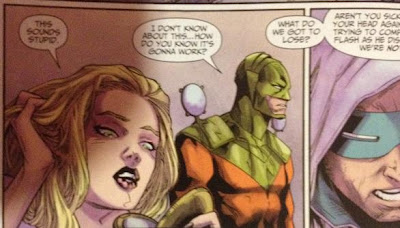 Poor Mirror Master, not only do his new powers leave him stuck in his own mirror world his costume is ridiculous. Even when the shoulder mirrors are removed I still can’t get over the mask. Something about it just looks completely wrong. I also find it interesting that Captain Boomerang isn’t with the Rogues; maybe it’s because Blackest Night already gave him shadow boomerangs. 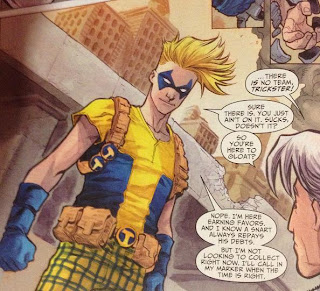 There is something about the Trickster though. Axel was always the annoying kid and even in the Rogue flashback that was the role he was playing. Now he’s seemed to have smartened up, he’s working angles. It may be the change in artists, but he also seems a little older. I really hope I’m not reading too much into this, but it seems like there is something cool going on here. I want to find out what he’s up to.

So there we have it. I’ve mentioned more negatives than positives this time week. It wasn’t all bad. I seriously cheered out loud when the escaping Rogues ran face first into a wall of ice. But I’m still not sure what happened between them and Cold at the very end. They all rejoined him just because he said so?

We know from the advanced solicits the gorilla invasion story is going to run at least into July. That is probably a good thing. They’re trying to tell a lot of story here, make sure you take time to tell the whole story. Am I going to drop the Flash? Even though there are things I really do not like about the book, the story does have me hooked. I’m on board at least until January.