It’s Hangover Thursday, how’s your head? I managed to get all my drinking in early this week so my head is pretty clear this morning. Tuesdays are the first day of my work week and this Tuesday we were slow enough that I was able to only have to put in a half day. So I ended up at my local World of Beer and a enjoyed a nice dark bar on a bright afternoon. 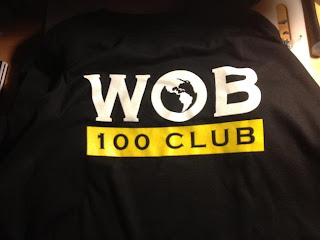 What I didn’t know is that having that Brooklyn Maple Porter and Cain’s Dark Mild would put me in World of Beer’s 100 Club. Now I’ve been a member of World of Beer’s Loyalty club since April of 2011, so just now hitting 100 is not some major feat. I’ve taken my time to get there. So what do I get for joining the 100 Club? First I received a 100 Club T-Shirt. The picture above is the back of the shirt; the front has a small WoB logo. It’s a simple design and something I’d actually wear so I’m pretty happy about it. 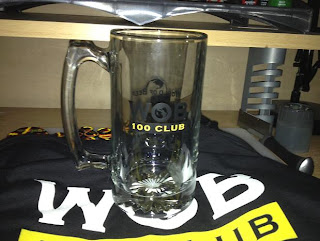 I also received a 100 Club glass. You can see it has 100 Club on one side and the WoB logo on the other. I guess I’m a sucker for drinking glasses, because I really like this one. This thing has some heft on it too; I mean you could really do some damage if you had to crack someone over the head with it. I don’t know why I even though of that. Long, long ago Brandon and I used to have to bring our own glasses to our local bar. My next Loyalty Club reward isn’t for another 150 beers, so I’ll probably be telling that story long before I get to talk about the Loyalty Club again.