DC Comic’s new April solicitation came out yesterday. Buried under all the re-launches and crossovers is the solicit for Superman Family Adventures. No big deal, the All Ages section of these releases are always at the bottom. Unfortunately that listing contains the words, “FINAL ISSUE”. That’s right, after 12 issues Superman Family Adventures is ending. That’s sad news in and of itself. Art Baltazar and Franco brought the same charm to the Superman Family that they brought to their Eisner winning Tiny Titans. It’s a loss to an industry that needs to keep kids reading. That listing was also a shitty, cowardly thing to do. 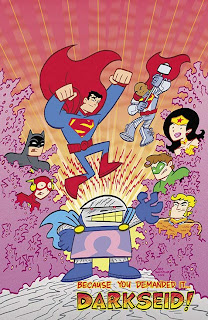 Let’s say you’re DC. You have a writer and illustrator team that has created 60+ books for you. Popular books. Award winning books. Maybe, the sales have slipped. For whatever reason, you decided to cancel their book. Do you do it over email? That’s not the best way of course, but it works. Do you show that you’re a decent human being and call these people who’ve been working for you since 2008? Or do you not say anything and break the news to these two men through the April sales solicitations? Guess which one DC did? Fuck DC. I read somewhere last night defending DC, that is how things are sometimes done in the comic business. An industry that is hemorrhaging fans can’t afford to treat its talent like that.

If you loved Tiny Titans or Superman Family Adventures, you really need to be following Aw Yeah Comic’s twitter account @AYCPublishing. There will be new Art and Franco comics and the Twitter account has already teased some covers.