The Ballad of Kid Largo: The Lincolns 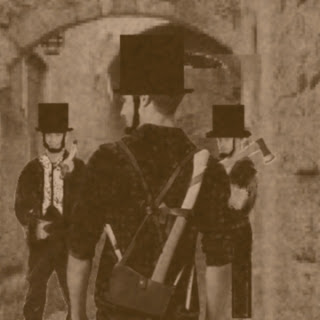 Gibson City is a very unforgiving place to live. The majority of wealth and power are held by the three power companies unofficially known as the Trinity. Those who work in the upper levels of those companies never leave the safety of their company’s secure areas. Those who do the physical labor do not have that luxury. Outside the walled areas Gibson becomes a sprawling slum filled with street vendors, abandoned buildings, and gangs.

The exact date of the Lincoln’s founding was not recorded, but they’ve been around for at least the past 50 years. The way the gang tells their history, is that they’ve been around as long as Gibson has been a city. Their initial Lincoln territory was along Harden Avenue. All members of the Lincolns take Lincoln as their last name. Only their leader uses Abe as a first name.

Because there is little pre-disaster information remaining it is unknown where the Lincoln founder even found out about Abraham Lincoln. Current gang members know very little about the actual man that they impersonate; they believe he was powerful warrior king who carried an axe. Like most gangs in Gibson City the Lincolns are extremely violent and are responsible from all sorts of crimes. While they don’t deal in drugs like many of the other gangs, they are heavily involved in protection rackets.