As a fan of comics and reading in general, I usually treat the news that Hollywood has their sights set on a property I enjoy with dread.  I mean, sure it could be the one movie that somehow gets it right.  Even the movies that generally get positive reviews don’t get everything correct.  Despite loving the Lord of the Rings films I could probably talk for an hour about the things I didn’t like in them.  Today’s news that sends me into alternating throes of excitement and anxiety is that Shane Acker is going to direct Reel FX’s Beasts of Burden.  Acker is directing and Darren Lemke is writing the adaption. 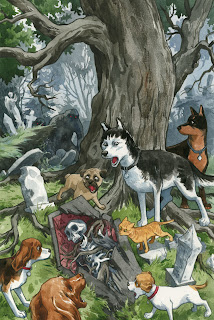 Beasts of Burden is an amazing comic created by Evan Dorkin and Jill Thompson.  The stories center on the animals that live in the neighborhood of Burden Hill and how they deal with the paranormal threats that enter their neighborhood. Sometimes they are funny, sometimes scary, and sometimes they are outright heartbreaking.  Beautiful art added to incredible stories; it is something that needs to be read if you haven’t already.  Luckily there is a hard cover that collects the first 4 short stories and the four issue mini-series that followed them. 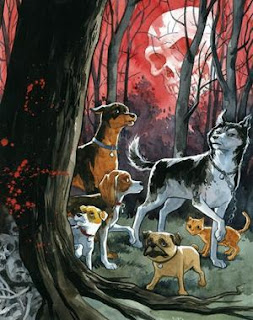 The movie has a hard road to travel.  Hollywood pretty much assumes that anything with talking animals is going to be for kids.  Add in that it is talking animals and a cartoon, it will be an uphill battle not to have this watered down to Scooby Doo levels.  Things die in the Beasts of Burden comic.  Sometimes it can be bloody.  Let’s hope the movie can live up to the source.
Posted by Ken O at 10:22 AM