Action Lab Comic is creating a new line for their comics called “Action Lab: Danger Zone”.  The Danger Zone imprint will feature comics for Mature Readers only; so they can get more violent, gory, and strange than Action Lab’s normal line up.  The very first of those comics “Ehmm Theory” will be released in May, which means your local comic shop will still be able to preorder it for you if you’re interested.  So what is Ehmm Theory about? 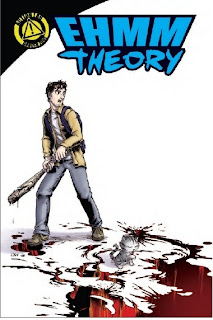 The cover gives you a pretty good idea that it’s going to be a bloody book but it doesn’t really prep you for how strange everything is going to get.  There is a lot of setup in the first issue and there are still a lot of questions that it leaves unanswered.  It’s one of those stories that as soon as you put down the first part you’re looking for the second part because you need to find out just what is going on. How strange is Ehmm Theory?  What I’m about to tell you only covers the first three pages, so while it is spoiler material I consider it pretty light.  A man with a talking kitten fights zombie circus midgets in a graveyard.  Personally that’s the kind of strange I can get into. 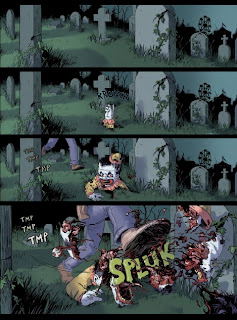 The story is by Brockton McKinney, Larkin Ford provides the art, and Jason Strutz is on the colors.  The art has a nice balance between realism and cartoon.  It works well; the kitten sidekick probably wouldn’t have worked as well if the artist had gone with a hyper-realistic style.  There are a couple panels where Ford and Strutz really let loose and it looks fantastic.  The pacing of the story is solid.  It’s one of those stories where learning what is really going on is part of the story; so I guess the best praise I can offer is that I can’t wait for the next issue just to see what is going to happen.

Again, Ehmm Theory will be out in May, so you still have time to tell your local shop you want a copy.  Remember pre-orders are incredibly important in the comic’s industry, especially when you’re dealing with a book outside the big two.  Action Lab Comics did provide That F’ing Monkey with a digital review copy.
Posted by Ken O at 10:13 AM