The Answer is B; Beer

It’s Hangover Thursday once again. Personally my head is pretty good right now; hopefully everyone else’s is too. I realized last night that I’ve been going to my local bar of choice almost every Wednesday for over a year now. I know it is around this time because one of my earliest visits there I cleaned up on the Halloween trivia. So much so that people were starting to get upset at me. Of course at the bar you win a free draft beer if you win the round, so people were mad I was getting all the free ones.


I love bar trivia though. I think it is something about being a geek, you have all this useless knowledge catalogued in your brain and you are just dying to share it with people. When I was working out in Shreveport this big group of girls were playing the video trivia and the one sitting next to me was struggling. Her friends were giving her a hard time about it too. That’s when the screen showed, “Coming up next Indiana Jones Trivia!” I told her I’d win her the round if she’d by me a beer. We proceeded to destroy everyone else playing that round.

I did okay last night. With six rounds of play I’m always happy if I win one; especially when there are sometimes teams of 4 or 5 people playing. Never figured out how they split the beer 4 ways when they win. On top of that I also got to work on my list. Not only that I was told I didn’t have to drink the two Monster Energy drinks that are on the list since they aren’t alcoholic. 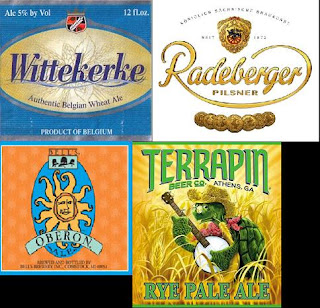 So beers 86-89 were Witterkerke, Radeberger, Bells Oberon, and Terrapin Rye Pale Ale. Everything else I drank that night was already checked off my list, I really need to stop doing that.  Hopefully there is Halloween trivia next Wednesday.
Posted by Ken O at 9:19 AM