Tales from the Brain Jar, #7

Tales from the Brain Jar might have taken a week off, but we’re back! We are also getting about a third of the way through my book. So I guess I need to be on the look out for new opportunities to get some sketches. In the last installment I mentioned that Brandon was up at Motor City Comic Con and was kind enough to get me two different sketches. The first was the awesome Mouse Guard and this week we look at the second one.

Guy Davis did this Liz Sherman for me. If you don’t recognize Liz, she is a member of the B.P.R.D. and to a lesser extent was the love interest in the Hellboy movies. I say lesser extent because I could never get my head around the idea of the two characters hooking up; it bothered me so much I have never seen the second Hellboy film. Ever since Hollow Earth where Hellboy is shown like a big brother, it makes it almost incestuous. Abe and Liz? Sure, I’m fine with that. Sword of Storms made me giggle like a school girl. 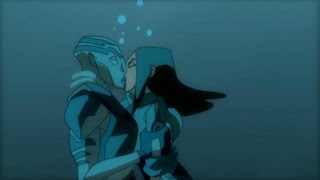 Let’s get back to Guy Davis though. Since the show I’ve had chances to meet him and he is just a super nice. I knew of him from the Nevermen series and already loved his work from that. I was unsure what to think of his take on the B.P.R.D. characters when he did his first one-shot. As he became the main artist for B.P.R.D. he put his own mark on the characters and now it is hard for me to see anyone else draw them.

Guy also gets extra cool points for doing a drawing of Roger in a kilt for the Hellboard. Dark Horse has announced that they are doing B.P.R.D. omnibuses so if you missed out on the fun, there will soon be an affordable way to catch up.  Next week the sketchbook goes back to Megacon.
Posted by Ken O at 10:21 AM