The following story is all true. I’m not creative enough to make these things up. Yesterday I mentioned I had met the craziest photographer in the world, now I believe it is my duty to tell the world. 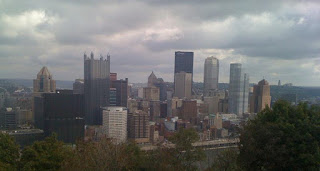 It is a Thursday, the wedding is Friday. The bride and groom want some pictures of the wedding party in Pittsburgh. It means an extra day in a tux, but hey I’m a trooper. The first location is a great one. It’s an area looking over the incline with a fantastic view of the Pittsburgh skyline. As we’re walking to get there a random stranger walking away from the area tells us that the photographer is pissed and has been bitching about us for five minutes. We are supposed to be there at 11. The boys get to the picture taking area at exactly 11, how do I know? The bells of a nearby church are ringing.

So we’re actually thinking there is going to be an argument and a guy getting punched. Almost the first picture he takes makes it look like we’re pissing off the scenic lookout and onto the road below. There were some normal pictures, after that there were pictures of us throwing our hands up in the air and jumping. The next thing I know we’re walking down the middle of the street and he’s taking pictures. We’re blocking traffic as the 6 of us walk shoulder to shoulder down the street. Then he wants us to cross the street like Abbey Road. I joke that I want to be Paul and take my shoes off. He says, “That’s a great idea. Shoes and socks off everyone. Who does this?” Also he decides we need to reach our right arm out and rest them on the shoulder of the person in front of us like we’re fucking elephants at a circus, I don’t remember that in Abbey Road.

Seriously, it gets stranger. Check it out after the jump.

We also took some pictures with the girls. Brandon and I didn’t know our bridal party partners, but the day was just getting started. We’re off to the next location. Directions went something like this, “We’re going down to XXXX, no wait. First we’ll stop at XX and XX Street. We’re going to park on the side of the road, we’ll be illegal for a little bit but that will be ok.”


So instead of blocking traffic on some side road, we decided to head into downtown Pittsburgh and block traffic. The crosswalk light comes on; we start in the middle of the crosswalk and start walking into the intersection. Apparently when you walk towards a photographer you have to look to your sides and talk to the people around you. So we are standing on the street corner and starts talking about us carry the girls piggyback style across the road. He points to my partner and says, “You; mount him.” She wasn’t having any of that. He looked dejected, but decides it is time to move on.

Now we’re at some park. They have a carousel, so of course it is time to take pictures on it right? He sweet talks the ride operator and next thing we know we’re all standing on it. Can’t have that, much too normal. Suddenly it is, “you, put one leg up here, you grab the triceratops horns and push your boobs between then, you sit backwards on the eagle.” Again, I’m not making this up. He told a girl to push her boobs between a triceratops’s horns. 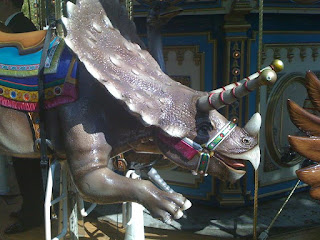 The next location is almost normal. So I’ll take a moment to point out two things that have been happening all through out the day. As we’re getting positioned for the pictures Brandon and his partner always ended up in same pose, gazing directly into each other’s eyes. Everyone else has maybe an arm around the waist or arm and arm. Not those too; they always looked like there were about to suck some serious face. These were people who just met that morning. Also after every couple pictures he’d look down at his camera and say, “that’s good shit.” Once would have been funny; it happened so much it became our favorite catchphrase of the weekend.

Four locations down, we go to the last one; a columned building with a set of large stone steps in front of it. Except as we’re walking up, a college professor decided the steps would be a great place to hold class outside. Photo-man flips out. “Hey, hey, hey!” he starts yelling at them and running up the stairs. He talks to the professor for a moment and moves them off the stairs. Seriously, he bribes them with a big group photo of them sitting in front of the columns and they go away after that.


After that he’s back to talking about bean bags, good shit, and having Brandon stare longingly into his partner’s eyes. Here is the thing though; I’ve never wanted to see wedding pictures so badly. I didn’t even want to see mine. I can not wait to see the photos this crazy fucker took and that's good shit.
Posted by Ken O at 11:03 AM

Email ThisBlogThis!Share to TwitterShare to FacebookShare to Pinterest
Labels: Pittsburgh