After weeks of searching I got a picture text one day of a friend holding up a box of Hostess Flash cakes. I had been to every grocery store in my area numerous times and like a 70’s Hostess ad; I had been thoroughly defeated by the snack cake. Batman and Superman branded treats were everywhere. I had run across Glo Balls at one location but no Flash Cakes. So finally it came down to some friends who were way down in South Florida who came to my rescue. What follows are entirely too many pictures of a snack cake and its packaging. 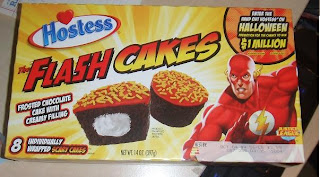 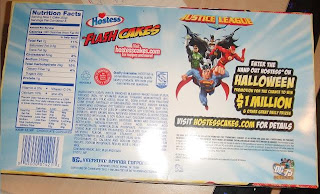 The box is colorful enough and has a good picture of the Flash on it. It has been mentioned elsewhere that the cakes are called “scary cakes” for some reason. Maybe that title is given after looking at the nutritional information. The obsessive collector in me wants to open both sides of the box so I can store it flat and keep it in my collection. The more sane side of my mind tells me it is just a cupcake box and needs to be thrown away. Neither side has won the argument yet. 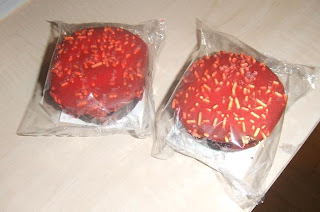 I was disappointed that the wrappers didn’t have little Flash logos printed on them. I have no good idea why I expected that. On to the actual cakes, well the yellow sprinkles don’t look nearly as vibrant on the box art do they? In fact the frosting/sprinkle combination looks less then appetizing. That’s not coming from a health food nut or anything. I will happily take down a normal Hostess cupcake with no hesitation. You find me a Hostess pudding pie? I’ll push a nun down the stairs for some of those. 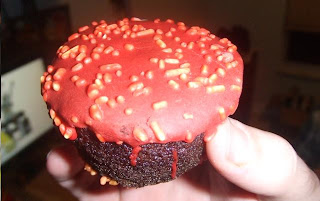 And then there is the interior shot. Sorry about the Flash on the Flash Cake. It made the filling all glowy like it is in a bad anime or something. It had been some time since I’d had a Hostess cake. It isn’t bad, but it isn’t something I’ll be picking up every time I go grocery shopping. I’d prefer a Twinkie and I only get one of those maybe once a year, unless viewings of Zombieland make me crave them like a zombie craves sweet, sweet brains. 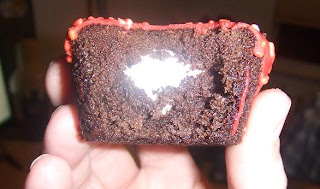 That’s it for Flash cakes. It was such a pain searching all over for these things only to find a mediocre treat at the end. But it was never really about how the snack tasted, it was about being excited to find something Flash related when everything else is branded with Superman and Batman. I’d say the same for Green Lantern, but we all know that tidal wave of merch is just around the corner.
Posted by Ken O at 9:57 AM