Elvis Costello: The Return of the Spectacular Spinning Songbook 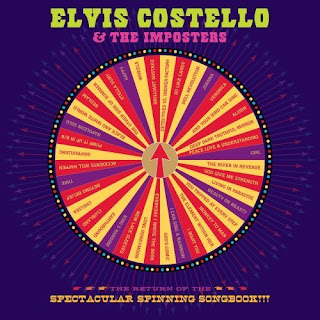 We at www.elviscostello.com find ourselves unable to recommend “The Return Of The Spectacular Spinning Songbook” as the price appears to be either a misprint or a satire.

All our attempts to have this number revised have been fruitless so we are taking the following unusual step.

If you want to buy something special for your loved one at this time of seasonal giving, we suggest, “Ambassador Of Jazz” - a cute little imitation suitcase containing ten re-mastered albums by one of the most beautiful and loving revolutionaries who ever lived – Louis Armstrong.

The box should be available for under one hundred and fifty American dollars and includes a number of other tricks and treats.

Frankly the music is vastly superior.

If you should still want the component items in the above mentioned elaborate hoax, they will be available separately at a more affordable price in the New Year, unless you are one of those pirates who imagines they are evangelists or that other people’s rights absolve their own thievery, in which case this is between you and your dim conscience.

Tickets are currently on-sale for the Spectacular Spinning Songbook appearances in the U.S., U.K. and Europe during April, May and June of Spring of 2012. More dates will be announced in the very near future.

The Super Deluxe Edition is over 200 dollars. The statement makes more sense now though doesn’t it? For 200 dollars you get a CD, a DVD, and a 10” Vinyl EP. The recordings are from a live set that occurred over a 2 night stand in Los Angeles in May of 2011. The set is limited to 1, 500 copies and come with an autographed card from Elvis Costello. There is also a 40 page hard cover book with photos, a tour diary a concert poster, and a post card. That’s a lot of stuff, but I think I’ll be waiting like Elvis suggests.
Posted by Ken O at 10:49 AM