Happy Flash Friday everyone! Today we’re talking about Eaglemoss again. I say again because this is the fourth time I’ve talked about their figures. I am a huge fan of the line and I’m always happy when I hear one of my favorite characters announced. For those of you who haven’t seen them before; the Eaglemoss line are hand painted lead figures who come with a magazine that talk about the character, their friends, enemies, and important story lines. 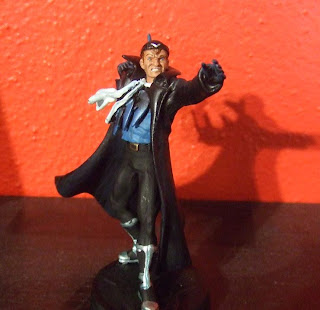 Today we’re looking at Captain Boomerang. This is the new and updated Boomer, reflecting the look he’s been rocking since Blackest Night. I have to be honest, I like his new look. It’s mostly the look his son wore, but I won’t turn this into an article about how Junior was mishandled. The figure sculpt is good, although with the outstretched arm and boomerang it is a little more fragile than most. 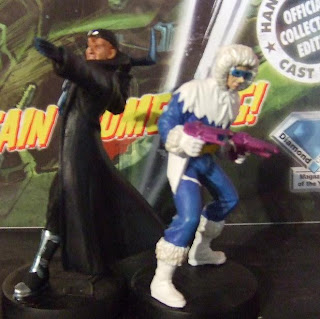 We’ve been seeing a lot more Boomerang merchandise since he got a makeover. The Action Force figure, the DC Universe Classics figure, and now the Eaglemoss figure. The more old school look showed up in the JLU three pack though. Captain Cold might be my favorite Flash villain, but I love all the Rogues, so I’m happy to see Boomer getting so much attention. When placed next to the Cold Eaglemoss, Boomerang seems tower over him. I know that is partly to the poses but I wish the line was scaled a little bit better. 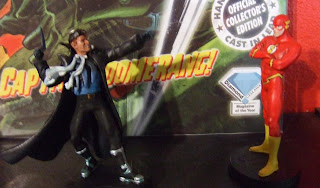 Since we are talking about Eaglemoss I wanted to mention that they are doing a chess set with the Bat family of characters. I’m jealous and happy all at the same time. I’d love to have a Flash chess set with Eaglemoss figures but I’d hate to pay for it. I’m not exactly thrilled with their choices either. I’d want the pawns to be multiples of the same generic character; like Gotham cops and nameless henchmen.  Maybe when I'm not in the middle of painting armies, video games, and 18 other things I'll make my own chess set.
Posted by Ken O at 10:53 AM