I’ve been pretty busy this week, I think if I even had a beer it would put me to sleep. So instead I’m going to tease something that I’m very excited about. On October 3rd you will be getting your first taste of a brand new web comic called “The Ballad of Kid Largo.” 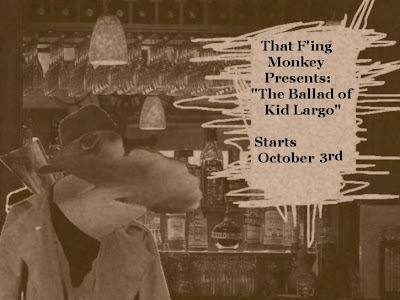 So what should you expect? I won’t lie; it’s going to be a strange ride. The strip is a mix of real photos, art, and scribbles all mashed together. I am not a great artist, but I’ve been playing around with this technique and I think it works. The strangeness of the designs will match the story. The above teaser was done pretty early in strip's progress, so don't expect that to be Kid's final design although it is pretty close.

I’ve wanted to add a web comic to That F’ing Monkey almost since we started, but it’s hard to convince people to draw for you when you can’t pay them. I think I should be able to keep up with a once a week schedule; if for some reason a strip is not ready I plan on having an article about a character, object, or city. That way you’ll still get a dose of the world and it will help expand the setting.

I think it goes without saying that this is going to be a grand experiment. It is quite possible it crashes and burns, if it does feel free to point and laugh.