Last June I was excited to talk about a game called Cards Against Humanity. It’s a delightfully simple game that lets you and your friends celebrate how offensive you can be. One player lays down a card with a question on it. The other players then go through their cards and each play a card to answer that question. Sometimes it’s nonsensical, sometimes it’s vulgar, but it is almost always in bad taste. My friends and I love it. We may be horrible people. 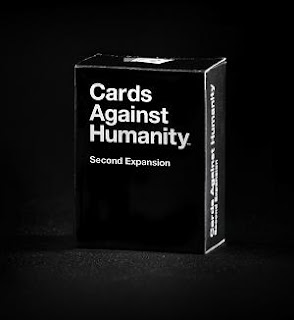 I was excited when they released their first expansion in November. It was quickly order, the new cards were mixed in with the old, and we horrible people in new ways. I have fantastic news, because the second expansion has just been released. There are 100 brand new cards and 12 blank ones. The blank cards are great because you can fill in your own group’s in-jokes. I know I’ll be ordering my set very soon.