Happy Flash Friday everyone! Today for Flash Friday I’m going to be talking about three products that were almost instant buys for me. But then as I looked closer at the product I realized just how unhappy I’d be with it. I guess you could cause them near misses. 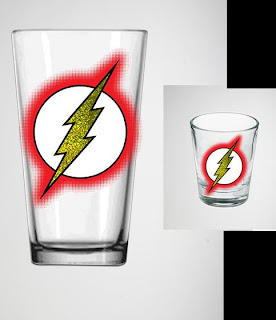 I’m covering two of the items at once here since they are more or less the same thing. Here you have a really nice looking pint and shot glass with the Flash symbol. At first glance it looked pretty perfect. Sure there was some color effects going on around the symbol itself, but it was still pretty simple. Then I enlarged the picture and saw the lighting was filled with a glittery substance. I was thinking of ordering both the pint and the shot glass. I’m just not sure how I feel about the glitter though. 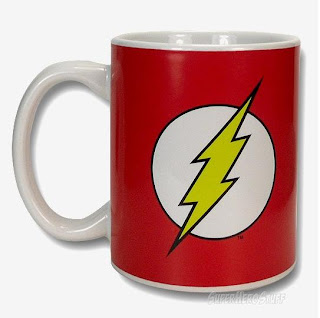 This next item I found on Super Hero Stuff. It’s a Flash coffee mug. I was getting ready to throw my wallet at the screen when I saw this one. A simple Flash symbol on a red back ground, this is exactly what I’ve been wanting. Sure it would have been better if the entire cup was red, but after pricing custom cups myself I know it is much cheaper this way. So what stopped me from ordering this amazing cup? 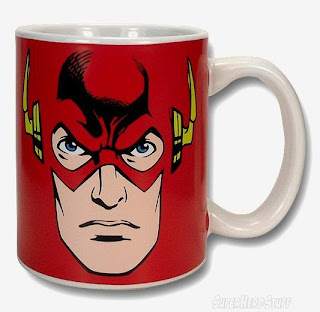 Aggh! What in the? What is up with face? Having a giant face staring at me first thing in the morning would already be unsettling enough, but the way the background color and mask color merge together is really creepy. It’s like someone pulled off the Flash’s face and stretched it around the mug. It reminds me of the face on Evil Dead’s Necronomicon. I was so close on that one.