Saturday was Games Workshop’s big convention, Games Day. I’ve been to numerous comic book and sci-fi conventions. I’ve been to conventions focusing on Star Wars, G.I. Joe, and Transformers. I’ve never been to a convention that focused on table top gaming. In fact I usually avoid the open gaming areas that other conventions set up. 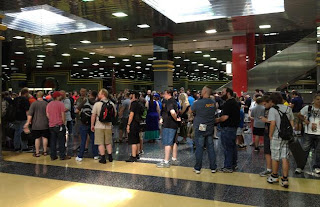 We arrived about 10 minutes before the doors opened and saw a giant mass of gamers waiting for the doors to open. As I scanned the crowd I was horrified to realize that there wasn’t a line, all of these people were just standing facing the doors. I just kept imaging people stampeding the doors as soon as they opened. Instead, when the convention opened three sets of double doors opened up and everyone just walked inside. I was speechless. 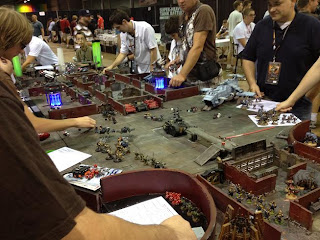 Most of the people went directly to the Forgeworld line. Forgeworld is branch of Games Workshop that creates its own specialty pieces. Their models are shipped from England, so ordering from them can be pretty pricey. The line for Forgeworld was huge. The most amazing part was that it didn’t need to be. You could email Forgeworld your name and what pieces you wanted and they would have them pulled aside for you. Brandon waited maybe 15 minutes to get his order. 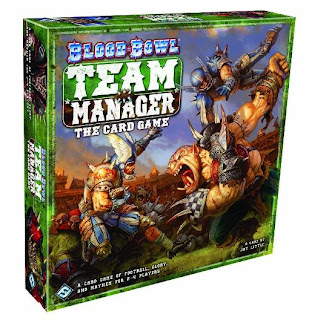 The Armies on Parade and Golden Demon entries were amazing. Both of painting and modeling competitions had some stunning entries. Some of the tables set up to play Warhammer and Warhammer 40K were pretty impressive too. While I didn’t play an actual game of Warhammer, Brandon and I did sit down and demo a game of Blood Bowl Team Manager. This card game by Fantasy Flight games is a blast to play, but I have to admit that my love for Blood Bowl makes me biased. 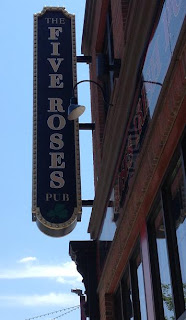 Brandon and I also spent a lot of time in the Irish pub on the other side of the parking garage. Finding food was like a death march, and we went the wrong way more than once. When we finally figured out how to get to the restaurants we realized how easy it was, but without any real directions it was more difficult than it needed to be. I suppose it just made us appreciate the cold beer. The food was great too. We actually ended up back at the bar when we had our fill of the convention.

Overall I had a lot of fun.  If the next Games Day is someplace easy for me to visit, I’ll go again.