Today I want to make a confession that will probably earn me some nasty emails; I hate Star Trek the Next Generation. When it premiered, I really wanted to like it. I gave it a lot of chances to turn my opinion around. This isn’t an attack on any of the actors, I just despised the show. To me Star Trek was about beaming down to planets, kicking some ass, and sleeping with their women. Next Gen was full of sitting around and talking, Klingons who only won fights on the holodeck, Pinocchio robots, and Wesley Crusher.

Wil Wheaton is who we are actually talking about today. Because despite what I think about the show that made him famous, I think Wil Wheaton is an extremely funny guy. His role in the Penny Arcade podcasts led me to reading his own site where he was writing about introducing his son to Dungeons and Dragons. Now I have to say I’m a huge fan. I spent a good portion of a rainy afternoon watching his new webshow TableTop. 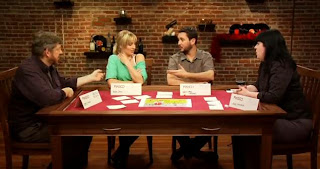 TableTop is a simple concept executed brilliantly. Wil invites three other people over to play a board game and they film the experience. Sometimes the players are new to the game, sometimes they are very familiar with it, and in one case one of the players was the writer of the game. Surprisingly the games are a lot of fun to watch. The shows are all on Youtube, but you can’t check out the shows homepage HERE. 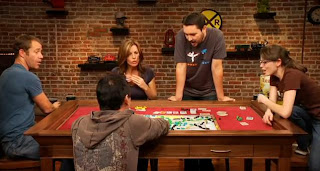 Another great thing about the show is that it serves as a great preview to how the game plays. Board games are not cheap to begin with and once you start looking at the specialty games they get really expensive. So the fact you can see how games like Munchkin, Ticket to Ride, and Settlers of Catan play before you buy them is extremely helpful.

So check out TableTop. I’ll also confess that my secret dream is now to be on this show and playing Cards Against Humanity. If you'll excuse me, I just saw that they put their coffee cups up for sale and I must have one.