Games Workshop has just announced their changes to the Citadel Paint range and they are huge. We knew it was coming. Months ago Games Workshop was changing how retail stores ordered their paint restocks, so something had to be up. Then in early March the real details began to leak. This wasn’t a change to bottles or anything; this was a change to everything. The line was expanding up to 145 items and every paint in the old line was being renamed. 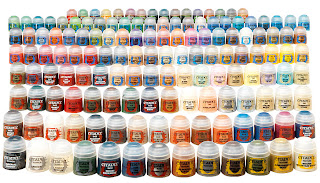 Now I am very color blind. Not just red/green either. I don’t see in black and white or anything, but I have a lot of trouble differentiating shades. Because of that, I’m very conscious of my color choices. When playing video games if the colors in the character creator aren’t labeled, I have to call my wife over double check my selections. I’ve made a couple people have green tinted skin because I was trying for Asian or tanned. So when I started playing Warhammer 40K again I studied numerous other peoples painting techniques for Salamander marines. When I was ready, I had a list of the paint names I needed. 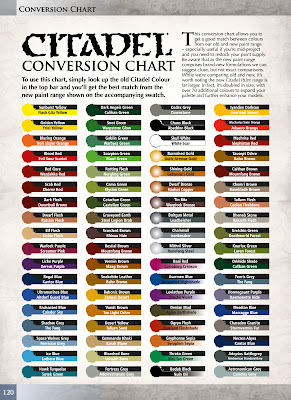 Thankfully Games Workshop created the Citadel Conversion Chart. This is my new best friend. When the news that changes were coming hit I did buy another pot of the paint most important to my army, but even that won’t last forever. I’ve shown off my Salamander Marines, and each of them requires two coats of what used to be known as Snot Greet. Now (when I finally run out of what I have) it’ll be Warpstone Glow. My beloved Boltgun Metal is now Leadbelcher. Oh and the most vile smelling thing in the world, Badab Black is now Nuln Oil. At least the names are still ridiculous.
Posted by Ken O at 10:53 AM

Email ThisBlogThis!Share to TwitterShare to FacebookShare to Pinterest
Labels: Warhammer