I’ll be the first to admit that my musical tastes are spread all over the map. I also tend to fall in love with bands that tend to dissolve after an album or two (you have no idea how much I’d love another Famous Monsters CD). For some reason punk songs with a female singer really seem to put me in a happy place. I can’t explain it really; and it doesn’t matter if it is pop-punk or hardcore. It just makes me smile.

I’ve been smiling a lot this week because I just got the new Tijuana Sweetheart CD in the mail. Under the Gun is third full album by the band and I can happily report that it kicks ass. If you’re unfamiliar with Tijuana Sweetheart you may have heard of them when they were Vagiant, or Vagiant Boston. They are responsible for the songs “FTK” and “Seven” in Guitar Hero and Rock Band. 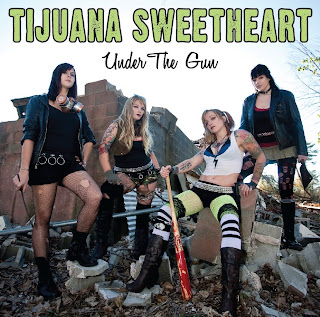 There is some experimenting with styles on Under the Gun. Some of the songs have more of a poppy sound and then the next has a solid metal feel. There are harmonies coming through that weren’t there on the other two albums. The band’s sense of fun hasn’t gone anywhere. Seriously, you can’t hear an amped up version of the Heathcliff cartoon theme and not smile. 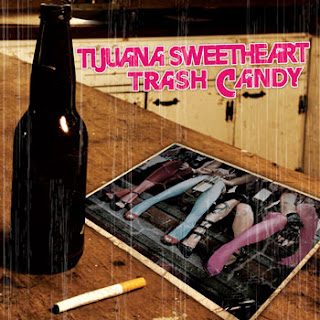 Also there is a cover of “Astrozombies.” I know, I know, another Misfit cover. Don’t worry about that. It’s amazing. Like slow dancing with your sweetheart at a 50’s soda fountain. You’ll understand when you hear it. So go check the girls out and get some new music. Of course if this is the first time you're hearing about them, don't forget their first two albums Public Display of Infection and Trash Candy.
Posted by Ken O at 10:53 AM