Happy Flash Friday everyone! My enthusiasm for DC comics took another hit this week with the reveal of the new Jay Garrick costume design. The hints that were coming out of DC was that Earth 2 was going to be different than what we’ve already seen and…darker. That’s just what I wanted to hear about something that is obviously named to tie into Golden Age characters. 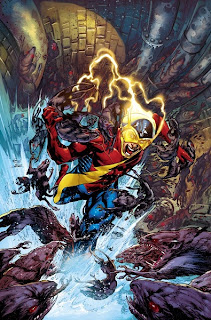 The picture is above. I’m really not a fan of the design, but I have to be honest and say I may change my mind after seeing a few more pictures of it. I doubt I'll change my mind about the helmet, Jay's was perfection.  Anyway after something like that, I need a laugh. Luckily Shelton Films has recently released an incredibly funny short called “The Daly Superheroes”. Check it out.

I know that it doesn’t seem like this would fit Flash Friday, but I promise it does.  Next Flash Friday will be more upbeat, I've gotten a few things in the mail lately.
Posted by Ken O at 10:29 AM