It’s Hangover Thursday, how’s your head? I’ve been putting in some heavy duty hours aboard the Normandy lately, defending the universe from Reapers and all that. I’ve still been able to some time in at the new World of Beer in my area though. At the bar I’ve had a few old favorites, but I’ve been trying some new things too. Without a doubt my favorite has been Southern Tier Brewing Company’s Choklat Stout. 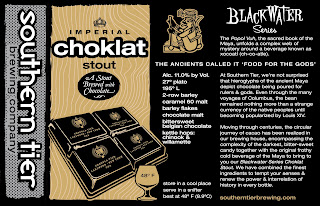 Served in a sifter you can smell this beer as soon as it is placed in front of you. It has this rich, chocolate smell that sets the tone for the rest of the experience. It pours nice and black, like you’ve got a glass of coffee in front of you. That smell carries over into the taste. It’s a smooth drink that has a bit of a bitter after taste, but that is to be expected with an Imperial Stout. 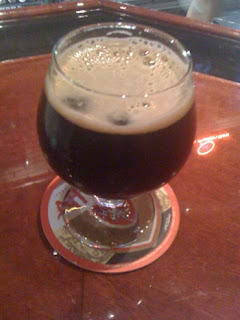 All that chocolate is hiding a real knockout punch too, an abv of 11%. You could do some damage if you were knocking these back quickly. You want to take your time and enjoy this beer; it’s worth your time. Southern Tier has two more stouts I need to track down. One is a coffee stout and the other mixes the Java and Choklat. I’m sure you’ll be hearing about it when I try them.
Posted by Ken O at 12:33 PM