So Michael Bay has access to another beloved 80’s toy franchise and the internet is not happy. This time he was recorded talking about the new Teenage Mutant Ninja Turtles movie. "These turtles are from an alien race," Bay said recently at an event. "And they're going to be tough, edgy, funny and completely loveable." This is not making people happy. Bay has tried to do some damage control, saying that we haven’t seen the story behind it yet and things like that. I expect right now there are probably three or four internet petitions going on. 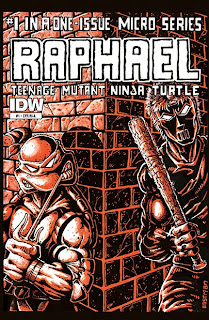 I understand what you Turtle fans are going through. I went through it too. In fact it the TMNT franchise that broke my heart way back in 1987 when that cartoon that you all love came out. I had already been reading the TMNT comics; I thought Raphael #1 was one of the coolest books I had ever read. I wasn’t lucky enough to have a first printing of TMNT #1, but I did have one of the numerous reprints. There were no “awesome” pizza parties, they didn’t have their initials on their belts, and the covers let me know that they all wore red bandanas. Foot soldiers were soldiers not robots, and there was blood. 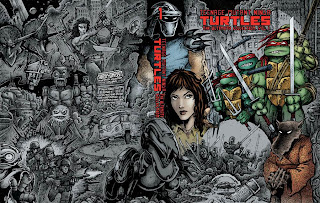 Honestly if you've never read the original turtle comics you are missing out.  IDW has started putting out really nice hardcovers collecting that Mirage Studios run. The first volume covers issue 1-7 and the Raphael one shot that I had mentioned earlier.  The second volume isn't out yet, although Amazon already has it listed for pre-order. 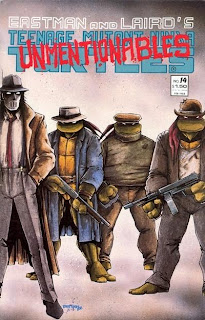 I’m not saying that Michael Bay is right, I still haven’t seen any of his Transformers movies and I never will. It is quite possible that the new TMNT plans are a complete train wreck. However good or bad the new movie will be, the TMNT franchise will survive. After all it already survived Vanilla Ice.
Posted by Ken O at 9:57 AM